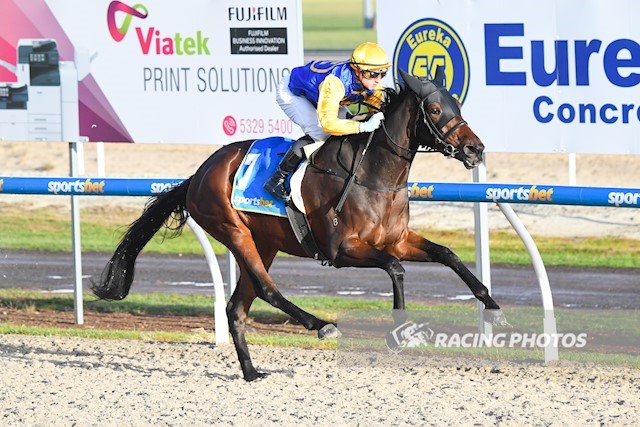 The Tony & Calvin McEvoy-trained filly is still learning about racing but still was able to make it two wins from just two starts.

The McEvoys have built an excellent strike rate on the Ballarat synthetic surface.

They have a 30 percent win and 60 percent place results with runners on the synthetic.

A solid $2.10 favourite, Silent Surrente, ridden by Mitchell Aitken, bounded away over the final 200 metres of the Sportsbet Bet With Mates Class One Handicap (1500m).

Aitken had Silent Surrente away well to settle second outside the leader.

The filly was being ridden along past the 600-metre mark but responded and then left her rivals standing with 300 metres to travel winning easily.

“It is hard to judge a horse’s racing pattern off one run,” McEvoy said.

“They can get it wrong their first start sometimes.

“I think her future is pretty bright, and she has been well placed. Not many horses win a maiden then score again at their next start.

“Let’s hope she can continue and go on with it, and we will get her onto the grass for her next start, and probably up several hundred metres in distance.”

“She’s trained on since her last win, it was a terrific win today” Aitken said.

“She jumped out and put herself there and travelled nicely for me.

“Hit a flat spot between the 800 and 500 metres which I had to ride her through.

“I probably went a touch too early, but I knew that she was going to stick on, and she did.

“She has definitely matured from her debut win here last month, and if she keeps on, she is going to go on to bigger and better things.”