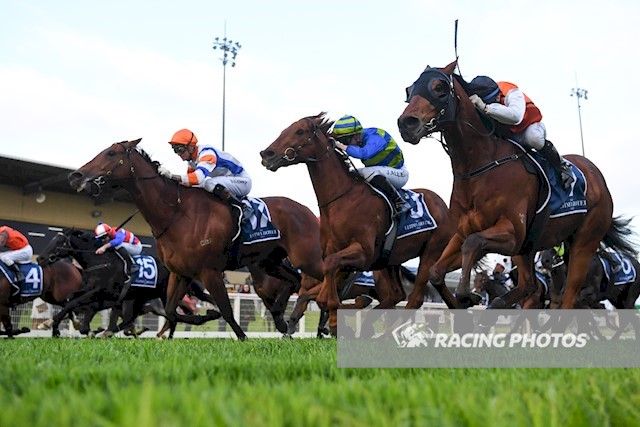 Bill The Boxer continues to win his way through the preliminaries on his way to a title bout.

He jumped only fairly from gate one but was able to accelerate through to be on the fence trailing the leader on settling down.

On the home turn, the big field of 14 spread out allowing McDougall plenty of room to come away from the inside and challenge the leader.

It was a slug up the home straight on the soft 5 rated track, but Bill The Boxer refused to give in and kept punching with the judge finally able to award him the decision.

Trainer Calvin McEvoy said the four-year-old kept stepping up to his challenges.

“He did a really good job there,” McEvoy said.

“Obviously, he had to bring the synthetic form and he was way up in grade.

“Number 17 and an emergency, he nearly didn’t get a run in the race.

“It was a great result for (owners) Wayne Mitchell and Lee Briggs.

“He’s a little bit pushy and tested us at the barriers, so thank you to the team, they have worked very hard and turned him out in terrific order today.”

Winning jockey Blaike McDougall suggested Bill The Boxer had a promising career ahead.

“I was pleased to pick up the ride for Tony & Calvin,” McDougall said.

“He’s a big bugger, raw, very raw and just mentally he has to put it together.

“It was a big step up in grade today and he had to come off a synthetic win, a dominant win, but do it back on the turf.

“His record of four wins from five runs is good for the connections but he is still a prep away mentally.

“But he is a nice horse, very clean winded, moves very freely.

“He’ll probably get over a bit of ground too, so to do it now over this trip, this isn’t his peak trip so it will be nice to see him stretch out over a bit further.”