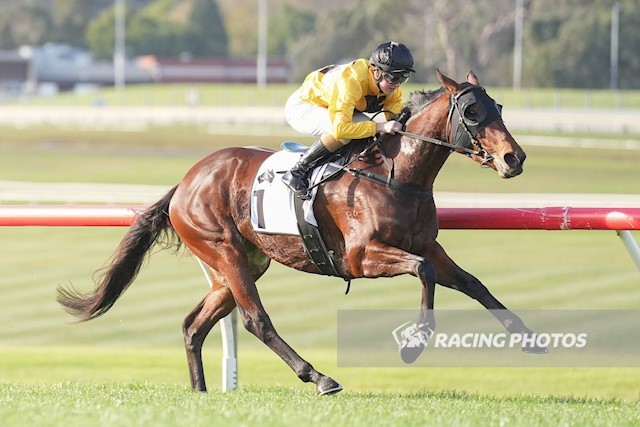 Star of Chaos certainly lived up to her name in winning on the Sandown Lakeside track on Wednesday, June 1.

The three-year-old filly proved a star for trainers Tony & Calvin McEvoy with her effortless win and caused chaos for her rivals leaving them struggling in the Thoroughbred Club Handicap (1600m) on the heavy 9 rated track.

Coming from gate eight, Kelly sat wide early on the filly before crossing down to lead clearly heading into the home turn.

On straightening, she asked Star of Chaos to lengthen, and the filly bounded away to win convincingly.

Rayan Moore, racing manager for the McEvoys, was surprised at the generous odds about the winner.

“They were juicy odds,” Moore said.

“We would love them to be painless like that all the time.

“It was a really good win today.

“She has been a high-quality filly, second in the spring to Espiona, placed behind Illation – that was really good form coming here today.”

Moore was not over concerned about the heavy 9 track rating.

“Both her placings were on a soft 5 so it gave us a bit of confidence coming here today.

“Her previous big margin win was on the synthetic, so she is adept on all surfaces, and we ticked another box today.

“We thought we would be outside lead, but credit to Alana she took the bull by the horns and controlled the race.”

Moore said with a filly or mare in form at this time of year you kept them going.

“I would say we would go through the winter, then give her a bit of a break into the spring but she is a really nice filly going places.”

Winning jockey Alana Kelly was impressed by Star of Chaos’ win and surprised by the ease of the victory.

“I caught a glimpse at the 100 (metres) on the big screen, and she definitely put them away.

“There was not enough early speed in it for her, so I was happy to ride out there in the good ground till we got to the corner.

“She took it up so easily and travelled down the hill so well.

“She just floated across the surface, you wouldn’t haven’t known it was heavy.”