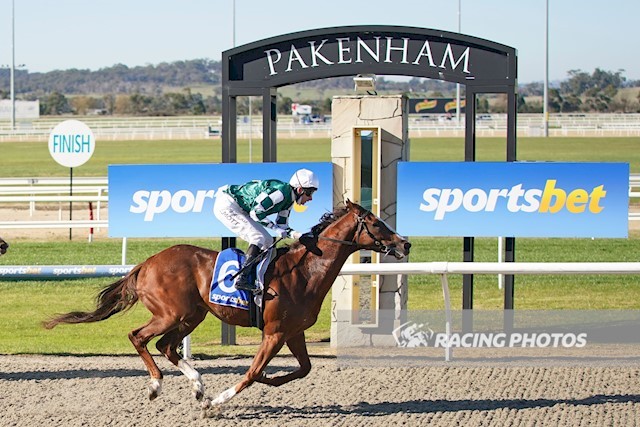 The wait was worthwhile for the connections of Yulong Justify, a debut winner on the Pakenham Synthetic on Monday, May 31.

The Tony & Calvin McEvoy-trained three-year-old drew clear over the final stages to score a 1-3/4 length win of the Watch Live On Sportsbet Maiden (1200m).

Yulong Justify began quickly but several others were keen to find the front so Mott allowed his mount to balance up and settle one-out, one-back.

Turning for home he eased the three-year-old three wide and Yulong Justify lengthened. After a short battle with the favourite, the gelding drew clear and ran strongly through the line.

Trainer Calvin McEvoy said he was delighted for the owners, Yu Long Investments.

“He has always shown promise but has been immature about going into the starting stalls,” McEvoy said.

“It has taken a long time to give him some confidence about going into the barriers. He was nervous heading in, then standing, in the gates.

“The boys, Finn (McCarthy) and Tim (Hanley) here at Ballarat have done a great job with him.

“What made today’s effort even better was that a horse next to him played up badly and was a late scratching.

“Jamie (Mott) came back and said the horse had not become agitated when the trouble was playing out.

“He is still a work in progress, but I loved the way he ran through the line.

Yulong Justify is a half-brother to the smart Regardsmaree, a winner of six races from just 16 starts.

He cost $180,000 at the Magic Millions Adelaide Yearling Sale.