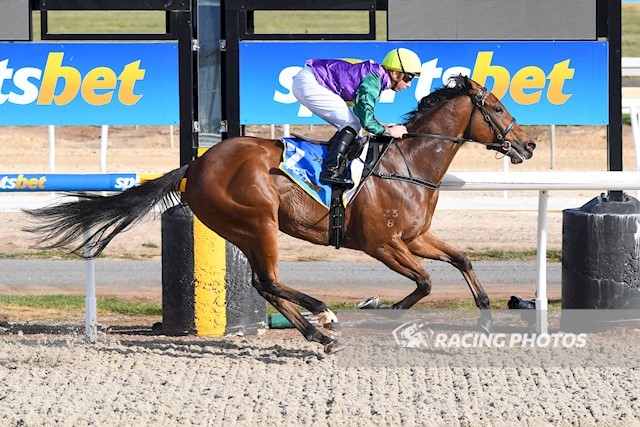 Newcomer Hurtle did exactly that with a slashing win on the Ballarat synthetic on Monday, May 24.

The Tony & Calvin McEvoy-trained two-year-old delighted his large ownership group including the 13-member MMR Spring Special syndicate, many of whom are first-time owners.

The syndicate was one formed by Jack Cripps who works in sales and syndications for McEvoy Mitchell Racing helping owners become involved at minimal cost.

Hurtle, backed from $2.50 into $2 favourite, gave his supporters more worries at the start than in the run of the Suez Two-Year-Old Maiden (1100m).

Ridden by Dean Holland, the gelding played a few games before going into the gates but once the barriers opened, he jumped in front and was never headed.

Hurtle hurtled away in the home straight to win by 5-1/2 lengths from Rock Melody ($19) with Ostracised ($2.90) a half-length away third.

“It was fantastic to see Hurtle do that,” McEvoy said.

“He’s been pretty sharp in all of his gallops, but obviously, you want to see him come to the races and do it.

“It is just fantastic for the ownership group, Mark Milano who has been a great supporter of our stable, Cornerstone Stud and the lads who came to the track to see him run.

“Hurtle was very strong at the end of the 1100 metres so he has scope to get further. He’s a hardy little horse that will handle that well.”

McEvoy said he was pleased with the dominance of the victory.

“When you have got a first starter in front, they can often have a good look around.

“I think it was a real advantage he does all of his work on the track, so he would have felt at home on it.

“It was a good result, and he looks to have a very bright future.

“We’ll see how he comes through it, he’s pretty hardy, I think he will handle it really well, I expect him to go home and eat up and we can maybe find something in town in a few weeks.”

Winning jockey Dean Holland was happy to have gained the mount on Hurtle.

“I galloped him the other morning and I was happy to be on him today,” Holland said.

“He galloped really well and the McEvoy team have done a fantastic job.

“They have been very patient with him and he’s always shown a lot of ability.

“It was pretty push button for me.

“He jumped good and I travelled in front, I didn’t have to do much, and he extended with plenty in the locker.

“I think there was plenty left, I only gave him one around the tail to switch on and go away from them.

“He’s got lots of ability, he’s only small but he is very strong, like a little Bulgarian weightlifter like myself, so it would be nice to stay on him.”