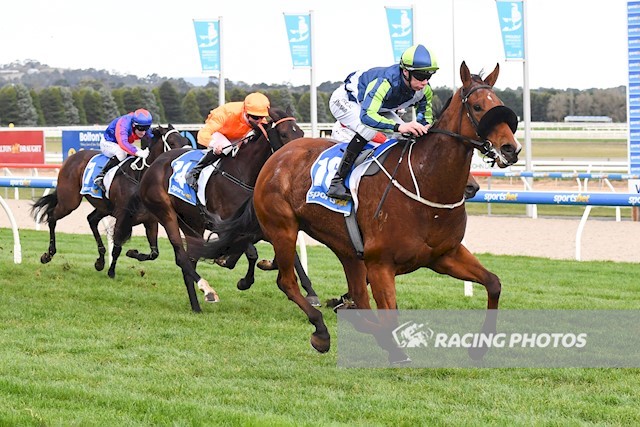 Lightly raced mare Fields Of Ivy, trained by Tony & Calvin McEvoy, looks headed for a strong preparation after an impressive first-up win at Ballarat on Wednesday, May 19.

Specked from $12 into $9.50, Fields Of Ivy finished strongly to win the Porter Plant Benchmark 64 Handicap (1200m) on a track rated heavy nine.

After beginning nicely, jockey Damien Thornton allowed her to balance up and the mare drifted back to near last in the field of 11 but elected to stay in the middle of the track.

Turning for home he came to the extreme outside on the four-year-old mare and she let down strongly gathering in the leaders and cruising home 2-1/4 lengths clear of Sacred Palace ($1.95 fav) with Red Cracker ($31) a short head away third.

Trainer Calvin McEvoy said he was delighted the mare had made a winning return after such a long break.

“This was a really good result,” McEvoy said.

“It wasn’t too expected. She is a really nice mare, but we probably thought she might need a bit further.

“Damien rode her beautifully, got her back, and she travelled up and was too strong over the top of them.

“She didn’t present amazingly today in the coat, and there is plenty of improvement to come there.

“Obviously she’s been off the scene for a long time so it was very pleasing for Darren Thomas and all the connections.

“She’ll have a couple of weeks (to get over the run) and we’ll step her up to 1400 metres, just try and take her through her grades.”

McEvoy said Fields Of Ivy had had a few problems.

“She was immature in her bones and had a cyst taken out of her nose which we had to have surgery on and that put a stop on her prep.

“The owners have had to be very patient, and it is a lovely result for them.”

“She jumped pretty well from the barriers and I was mindful to come out quiet and she relaxed really well for me.

“She was first up, so you’d think she is going to improve.

“She gave me a nice feel and feels progressive so hopefully she can go on to better things than this.”