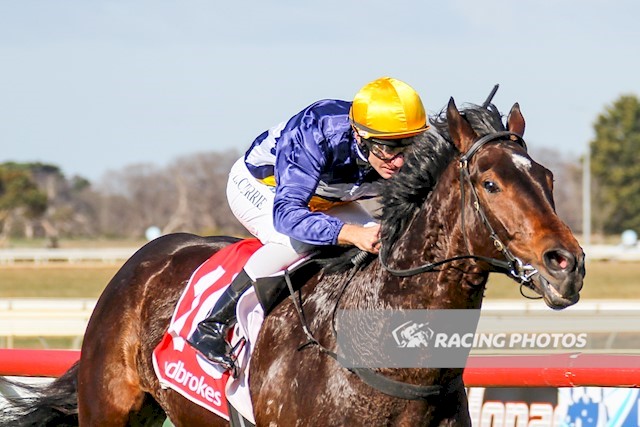 Trainer Tony McEvoy began the 2018-2019 season with a winner with his first runner.

Coming off his best season since beginning McEvoy Mitchell Racing, McEvoy finished the 2017-2018 season with a winner, Just Rolling, at Gawler on Sunday and on the first day of the new season took one runner to Sale in Victoria for a victory.

Resurge looked like a horse with a future when he drew away from his rivals to win the Littles Gippsland Coaches Maiden (1422m).

Heavily backed from $5 into $2.90 favourite, Resurge drew clear in the home straight to score a two-length win from Reposition ($11) with Chica Mala ($21), a similar margin away third.

The three-year-old colt was beautifully ridden by Luke Currie.

Resurge began well and Currie let him balance up third on the fence early before coming off the fence and joining the leaders with 400 metres to travel.

He didn’t ask for a supreme effort until just before the 200-metre mark and the colt answered to draw away and win well.

Victorian stable foreman Michael Shepherdson said it had been an impressive return to racing.

“He’s a big, strong colt and we’ve given him plenty of time,” Shepherdson said.

“We put him away after two runs earlier in the year and Tony has thought he could measure up as a Derby horse later in the year.

“He’s a big lad and there is a lot more to come. He’ll take good improvement from today.”

Resurge is a firstlight Racing syndicated three-year-old and was purchased for $250,000 at the 2017 Magic Millions Gold Coast sale.