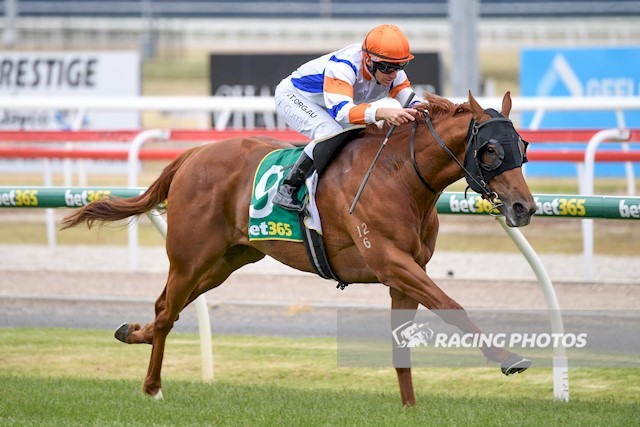 The addition of blinkers for the second time proved a winning move with the promising Wedgetail at Geelong on Friday, December 13.

The Tony & Calvin McEvoy-trained Wedgetail, the $3.10 favourite, settled second in the IGA Liquor Anglesea Maiden (1300m) before racing away from his rivals when jockey Luke Currie asked him to accelerate.

For the connections, and many of the stable staff associated with the gelding, it was a very popular win.

Wedgetail was placed three times from his first five starts before an eight-month break, then resumed with another second at Seymour late last month.

Melbourne stable foreman Michael Shepherdson, who is a part-owner of the gelding through his Best & Fairest Syndicate, was relieved the gelding had finally notched his first win.

“He’s kept us waiting but hopefully he can put a sequence together now.

“There’s never been any doubt about his talent, he has always bumped into one better.

“With a good run the other day after a break, blinkers on again and up in trip, the formula looked pretty good today.

“Luke gave him a really nice ride and it looked to be pretty genuine run and he was in the right spot to attack.

“He was very strong through the line so he might get a bit further with time.”

“It worked out nice,” Currie said.

“Stepping the horse up in trip with blinkers on and sharpening him up a bit – it was a good effort by all involved.

“It was pretty easy on my end.

“He jumped quite well – the leader skipped along a bit.

“He was a bit keen being back in the shades so when it rolled along, he was able to tuck back in and spit the bridle out for a few hundred metres, he was always going to be hard to beat.

“It was nice to see him really attack the line when he hit the front because they can float a bit when they get past those leaders so early – it was a good effort.

“I think we might have found the formula to him. He’s always run well, he’s only learning, and I think he’ll improve off this and it is a good confidence builder for him.”