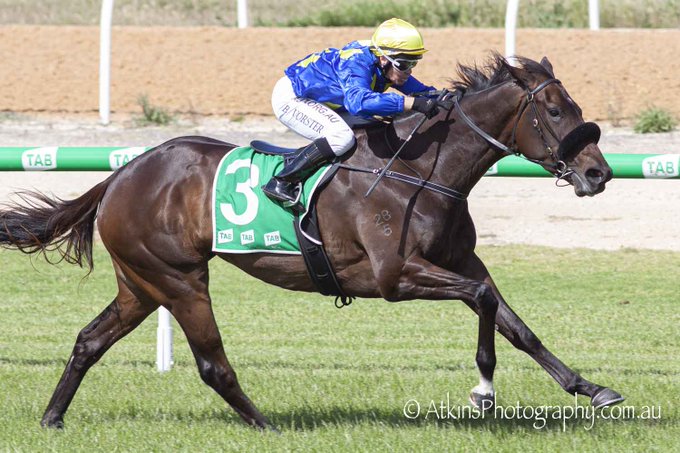 However, the victory wasn’t achieved without a great deal of interest and excitement.

His apprentice rider let Frank Goes Boom stride out to an early lead of about 12 lengths, a margin he maintained to the home turn with about 400 metres left to travel.

Barend Vorster, on Tatalina, the red-hot $1.45 favourite, had settled towards the tail of the field but allowed the mare to stride up to second turning for home.

The four-year-old mare responded and set out after the tearaway leader and gathered it in past the 100 metre mark.

Tatalina drew clear to win by two lengths from Sasun ($4.20) which chased the winner with Frank Goes Boom hanging on third a length further back.

The McEvoy’s South Australian foreman John Cornell was impressed by the win.

“It is lucky Murray Bridge has a long straight,” Cornell said.

“We are really pleased with Tatalina.

“She was great first up at the mile, and second up at 2000 metres is not easy to do.

“Then to chase that leader down, she’s got a nice future with us this girl.

“Ken McSweeney owns her by himself after buying the other partner out and decided to give her to us to train and we are very grateful.

“She’s a lovely staying mare so there is a lot to offer for her.”

Jockey Barend Vorster said he hadn’t been too concerned with the tearaway tactics.

“It helps to know your horse, and on top of that I rode the leader last time, so I knew he wasn’t going to be able to maintain it.

“But I did have to be mindful not to get too far behind.

“As soon as I pulled out at the top of the straight, she put her ears back and chased it down.

“Mid race a couple in front of me weren’t keeping up so I had to peel out, face the breeze and get going.

“She’s got a little bit of class about her.

“I won’t say it was an easy win today, she had to really work for it, but I think she is going to keep climbing the ladder.”