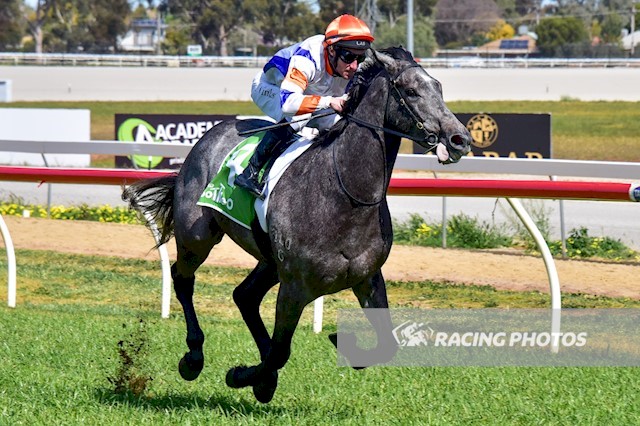 A masterful ride by James Winks saw the promising Sign of Ussuri, trained by Tony & Calvin McEvoy, make a successful return to racing at Swan Hill on Friday, September 13.

Winks had the three-year-old away well and settled one-out, one-back with a perfect trail before finding an inside run in the home straight to sprint through along the rails to score.

Michael Shepherdson, Victorian stable foreman, said the “unkindest cut” had been a key to Sign of Ussuri being successful on the racetrack.

“He was a colt when he made his debut at Balaklava in April,” Shepherdson said.

“Tony has always liked him but on debut he did a bit wrong.

“It was decided to give him the ultimate gear change and he has come back indicating he will develop into a nice horse.

“He’s got a good stride, excellent length, great conformation and has that little bit of quality.

“He is still a bit immature in the head but is improving.

“Today, James gave him a beautiful ride and it was great to see him dash up along the fence.”

Shepherdson said Sign of Ussuri gave every indication he would be even better at 1400m or 1600m.

“Tony and Calvin will see how he comes through today’s race before looking for his next run.

“Saturday race in town are pretty strong at the moment so perhaps he might step up to midweek company but I’m sure they will find a suitable race.”

“He was real raw, and doing everything on raw ability,” Winks said.

“In saying that there some real positives.

“He began reasonably well and rested but on straightening he got a bit lost and lost his action.

“It was just a matter of getting him balanced up again then when the runs presented, he took them well.

“When the race was there to be won, he wanted to throw it away by running out.

“I didn’t think it was in doubt because if one came at him, he would race again.

“When the penny drops, whether it is now or next preparation, it is onwards and up.”