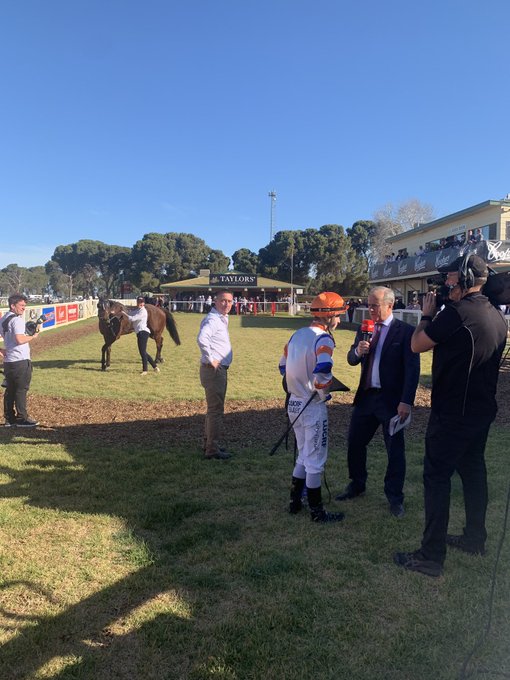 New training partnership, Tony and Calvin McEvoy celebrated their first week of operation with a feature win in the Listed $100,000 Heiniger Balaklava Cup.

It was Balaklava Cup specialist Brown Ben which gave the duo their first Listed race victory, and stablemate Shrouded In Mist made it a wonderful result grabbing third.

Brown Ben ran second in the race in 2017, was a most unlucky fifth last year, but today ran home powerfully to grab the win for jockey Cory Parish.

Co-trainer Calvin McEvoy said it was a special win.

“Brown Ben has been with us for a long time and got some fantastic owners Peter Robinson and Jack Stott.

“He won a Listed race just over two years ago, and the handicapper has got him since then because he’s such a small horse.

“He always tries, and Cory Parish gets on really well with him.

“I said to Cory today to be neutral on him, and not to move early. He was back on the minimum and he’s being going well at home. It was just fantastic.

“Thanks to the owners for leaving him with us and well done to all the staff at home.

“Actually, this day last year was going to be Brown Ben’s swansong and that he might be retired.

“However, he was really stiff and unlucky not to win the race, so we just kept going.

“He loves Balaklava, loves the mile, so now he’s won we might look at the Murray Bridge Cup and the Tokyo City Cup, which he won two years ago.”

“We were travelling exceptionally well today, a b it like last year,” Parish said.

“It was exactly the same, they wanted to stack up around the corner and he got trucking and I was a little bit worried.

“Then I just managed to find a little gap.

“I didn’t want take any chances and I just wanted him to have a nice clear run.

“I didn’t get it last year as nothing fanned out, so I didn’t get a clear run but today everything went well.

“It’s a very long straight so I just let him takes his time.

“I knew he was always going to get there, but I didn’t want to push the button too soon.

“He did it super and if ever a horse deserved a win in the Balaklava Cup, it was him.”

Part-owner-breeder Peter Robinson was “so excited” by the win.

“We had planned to come across from our home in Newcastle for the race,” he said.

“We had our flights and accomodation booked but something came up at work and I had to pull the plug on Monday.

“It doesn’t matter, we are still having a small celebration with a few friends.

“I’m just so happy for Tony, Calvin, John and the team at McEvoy Mitchell.

“We have loved having horses with the stable, we are just so excited by today’s win.

“We’ve been so lucky, and Brown Ben’s dam Innishbeg has been a wonderful producer. We have an All Too Hard foal to come through.”