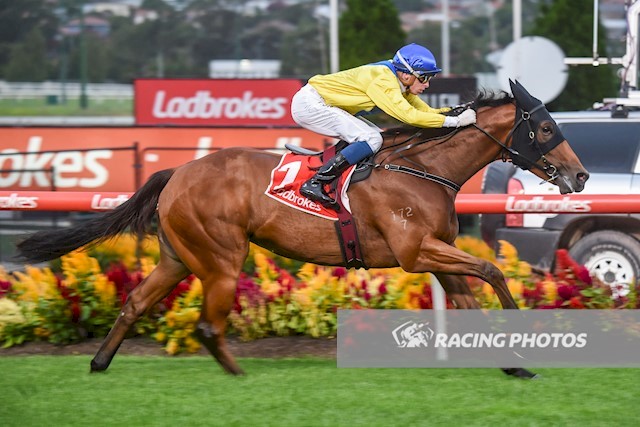 Two from two for Maha

Talented two-year-old Maha could be headed to Adelaide for a shot at black type races following her easy win at Moonee Valley on Friday, March 13.

Jockey Michael Dee had the filly away nicely from a middle draw and quickly allowed her to stride up and sit second in the run to the home turn, but on straightening dashed her away for an easy win.

The victory completed a perfect day for trainers Tony & Calvin McEvoy who had one runner at Kyneton, Night Passage for a win, and Maha was their only runner at Moonee Valley.

“She has been a little bit of hard work,” McEvoy said.

“Really, raw ability is getting her there at the moment, it is a little bit scary when she learns to jump, relax and actually race tractably.”

“For the first 200 metres she wanted to race and tear a little bit, but she is still unbeaten, two for two.”

McEvoy said Maha could head to Adelaide for an upcoming carnival.

“There might be a couple of nice little stakes race in Adelaide for her.

“It was lovely to get a winner Sheikh Khalifa, Tim Stakemire and with a Pride of Dubai which was very special.

“Luke Currie was a big factor in her early development, and he convinced us to have a third trial before her debut.

“He said we could have taken her to the races, and she might have won but she was more than likely going to make some mistakes.

“That was when we decided to go to the Werribee trial and for the first 400 metres to try and get her to relax which he did.

“She keeps improving and I believe there is more in store/”

“She has come a long way since her first run at Bendigo where she won quite impressively doing a lot wrong.

“With natural improvement, she relaxed tonight.

“Gee, she put them away quite easily.

“To still be fairly green and run through the line like she did, she is certainly going in the right direction.

“I would have like something to take me a bit further into the home straight.

“As it was, we hit the front at the top of the straight and she was still going strong.

“It is onwards and upwards for sure.”