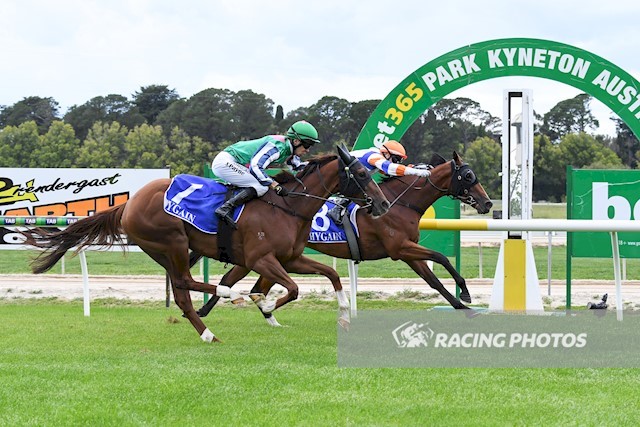 With blinkers on, jockey Jamie Kah had a plan to go forward from a wide draw and had the filly across to sit second in the field of 10.

Once up outside the leader, Night Passage travelled well but was left in front turning for home and Kah was able to establish a winning break.

The daughter of Not A Single Doubt was second up at Kyneton from a break and will derive improvement from the win.

“She looked to me as if she got to the front and switched off,” Rutten said.

“It was great to have her win and hopefully it gave her a bit of confidence.

“The blinkers made her more positive early.

“Even though she looked to switch off a bit late, I’m sure if another horse was up with her the blinkers would have switched her on again.

“Tony has always thought she would get a bit further than the 1400 metres of today.

“On the run today, she showed she has the stride to say she will, and we will wait for Tony & Calvin to map a plan going forward.”

“Tony said last state he thought she would get back but still be too good,” Kah said.

“She is such a dumb horse at the moment, so he put the blinkers on, and I know how much ability he thinks she has.

“Today I thought if she put it all together, she would win.

“It can be a horrible start today, so I gave her a dig out of the gates.

“Once she crossed, she come back to me and settled.

“We just needed a leader to take us a bit further into the straight.

“Hopefully she puts it together now after the win.

“I think she be better in better races where there is more tempo, and definitely over further.”