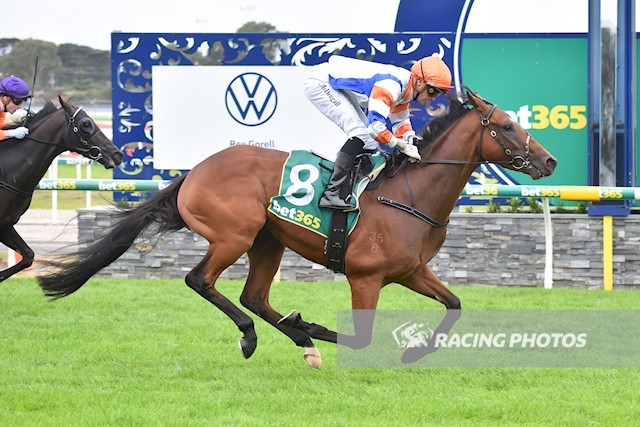 Promising young stayer Tavabeel broke through for his maiden win at Geelong on Tuesday, March 22.

Still in his first preparation, Tavabeel now has a win, second and three thirds from just five starts.

McDougall had the son of Tavistock in the running line midfield early, but he was the first horses off the bridle as the tempo lifted approaching the home turn.

Once in the straight, the gelding extended and ran powerfully through the line winning comfortably.

While Tavabeel is still in his first preparation, the trainers might look at the Galilee Series in Melbourne and a possible start in the South Australian Derby.

McEvoy stable foreman Tim Hanley said he was pleased Tavabeel had broken through.

“It was good to see it all come together today,” Hanley said.

“At start five, he’s been knocking on the door after four frustrating placings.

“It was pleasing to see him finish it off today instead of doing it all too early.

“It was a great ride by Blaike, but he definitely made him earn it.

“He was the first one off the bridle coming down the side. It was just good to see him finish it off, and he was pulling away from them on the line.

“He’s done a great job in his first racing preparation, and it is pleasing for the owners who have been so patient with him.”

“I’m amazed he has got up to the trip already, but he still put it together.

“Yes, he can stay, but he will keep benefitting and he’ll be even better next prep.

“He is a nice staying prospect.

“He put himself in a nice position down the back but came off the bridle early and made a bit of hard work of it.

“But he is a stayer, all day, all night, well done to the connections.”