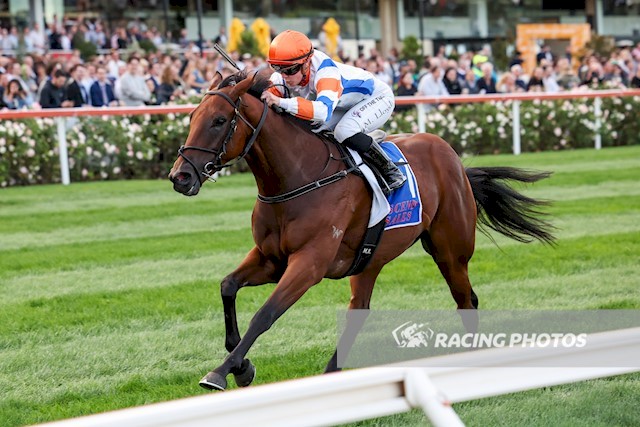 Despite being trapped wide, Jucconi showed his quality to win at Moonee Valley on Friday, March 25.

The gelded son of Nicconi began well but had other runners drive through underneath which saw Lloyd elect to go back and get into a rhythm.

Jucconi was travelling well coming to the home turn and Lloyd let him stride up, take the lead and go on to victory.

Rayan Moore, Racing Manager for McEvoy Mitchell, said it had been a strong victory by Jucconi.

“It was a fantastic win,” Moore said.

“We really didn’t have a good run in transit.

“We were posted three wide, but Maddie didn’t panic.

“I know it is a bit cold in Ballarat, but the team has presented this bloke in great order.”

Moore acknowledged that the McEvoy team had great results with the progeny of the stallion Nicconi.

“We’ve still got a few of the stock of Nicconi to be syndicated, so there are still plenty in the stable.”

“They really support me,” Lloyd said.

“I’m really grateful to get the sit on Jucconi again.

“Last start we wanted to ride him a little bit quieter, and he was unlucky.

“He got caught in a bad spot and I was unlucky that I did not get out early enough.

“Today, he was just too strong and was really tough.

“He jumped really well and I thought I might be able to get the sit outside the leader.

“But everyone kicked up inside him.

“I just let him settle into a nice rhythm.

“I ended up three deep but with a bit of cover down the side.

“Had to get off the back of them he was going that good.

“Probably got to the front a bit early but he was really tough.”