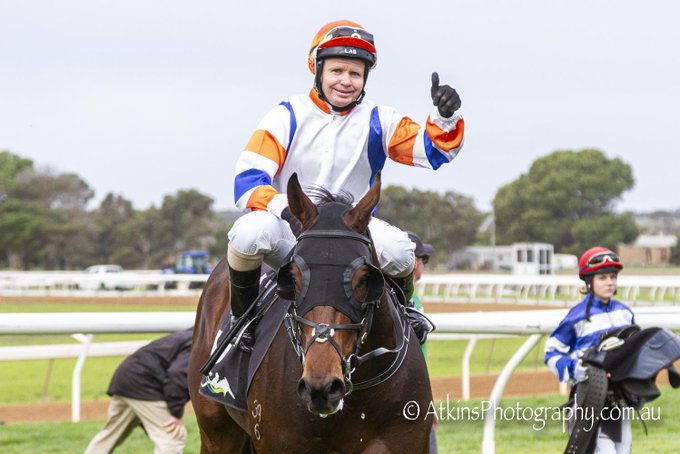 A never give up attitude enabled Zounami to grab a last-stride victory at Strathalbyn on Wednesday, May 27 giving trainers Tony & Calvin McEvoy a winning double.

Earlier in the day, Mayameen led throughout to win, but for Zounami it was a tough effort coming from midfield to grab the win.

Ridden by Barend Vorster, who also brought up a double, the three-year-old scored a short head success in the Strathalbyn Small Engines Benchmark 58 Handicap (1600m).

Vorster had the son of Zoustar midfield in a rhythm on settling down before asking him to improve coming up the hill.

As the field straightened, the runner-up dashed clear and looked the winner, but Vorster kept urging Zounami along and over the last 100 metres he kept coming and, on the line, grabbed the win.

The three-year-old had a good break after racing last year and over-raced when resuming at Gawler earlier in the month over 1515 metres fading to finish sixth.

With that run under his belt, the trainers decided to ride him quietly early today and it proved the winning move.

Tim Hanley, stable spokesman for the McEvoys, said it had been a tough win.

“We got it right with the change of rider tactics,” Hanley said.

“He just went too hard up front last start at Gawler.

“Tony thought from barrier nine today to try and ride him a bit more patiently.

“He couldn’t have been more impressive.

“I didn’t think we were going to get there when the runner up got a good break.

“But he really found late.”