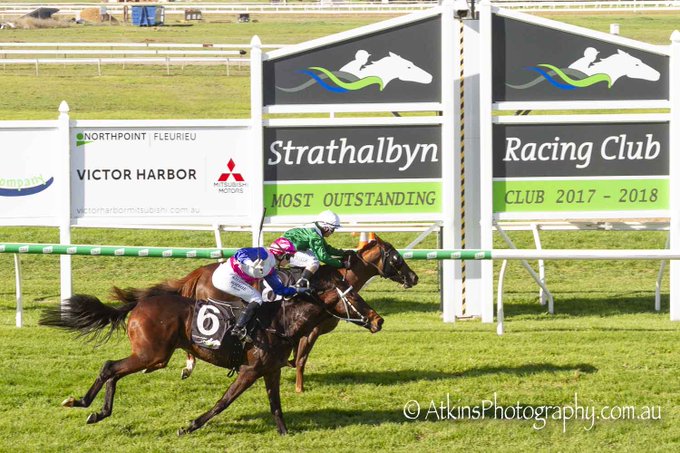 Blinkers on and race experience paved the way for a win by Mayameen at Strathalbyn on Wednesday, May 27.

Backed from $1.90 into $1.60 favourite, Mayameen, ridden by Barend Vorster, led throughout to score a neck win in the Finniss General Store Maiden (1350m) from Exalted Fire ($5) with Bad Habits ($21) six lengths away third.

The winner is a two-year-old filly owned by His Excellency Nasser Lootah’s Emirates Park and trained by Tony & Calvin McEvoy.

She made her debut over 1100 metres at Ballarat in March finishng midfield, and the McEvoys decided to switch her to Kildalton Park at Angaston.

With extra work and blinkers on, Mayameen was able to bounce to the lead and, well rated by Barend Vorster, kicked away turning for home to score. The first two spaced the rest of the field.

Tim Hanley, stable spokesman for the trainers, was impressed by the victory.

“Racing manners definitely was a key to the win,” Hanley said.

“The blinkers definitely sharpened her up a bit.

“I think that was Calvin’s idea and it proved a good decision.

“She was very new and green on debut at Ballarat.

“She has had another trial since and that benefit has brought her on.”