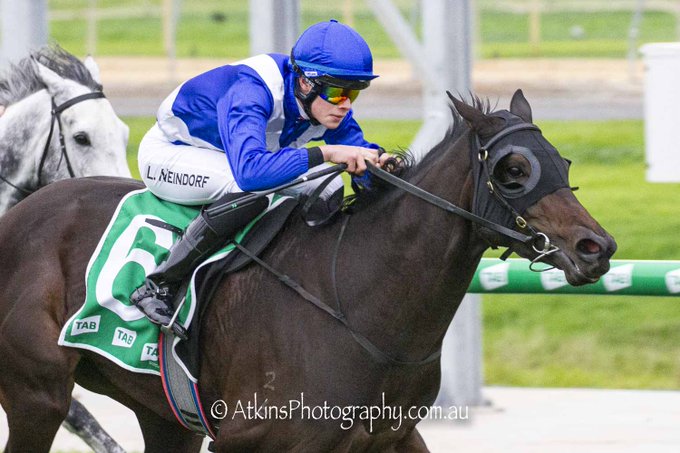 Improving three-year-old filly Dixon Street remained unbeaten this preparation with another tough win at Morphettville Parks on Saturday, May 30.

Again though, it wasn’t achieved without a bit of work.

At her previous run Dixon Street had to contend with a riderless horse pestering her, this time it was riders which make things tough.

Credit to apprentice jockey Lachlan Neindorf, he rode patiently, and it resulted in an excellent win in the TAB Benchmark 68 Handicap (1300m).

The filly, owned by John Singleton’s Strawberry Hill Stud and trained by Tony & Calvin McEvoy, now has four wins and three placings from just seven starts and is developing into a nice city class performer.

Dixon Street began well from gate nine in the field of 11 and Neindorf tried to angle her across to sit outside the pace.

But a few other riders also had plans of going forward and rather than panic, Neindorf allowed the filly to settle behind the speed before bringing her out in the home straight and allowing her to dash to victory.

“She’s thriving at home, looks fantastic and is racing well.

“There didn’t look to be any speed on paper in this race.

“We instructed Lachie to be positive and either lead or be outside the lead but there were a few of them.

“So, it was a really tough win and she deserved it.”

Dixon Street had an inauspicious start to her racing career running third at the South Australian country track of Clare.

“She was very small (at that time) and hadn’t matured yet.

“She flashed home and ran third, but she has certainly gone on to bigger and better things since then.”

“It was an excellent performance so early in a jockey’s career and early days of metro riding.”