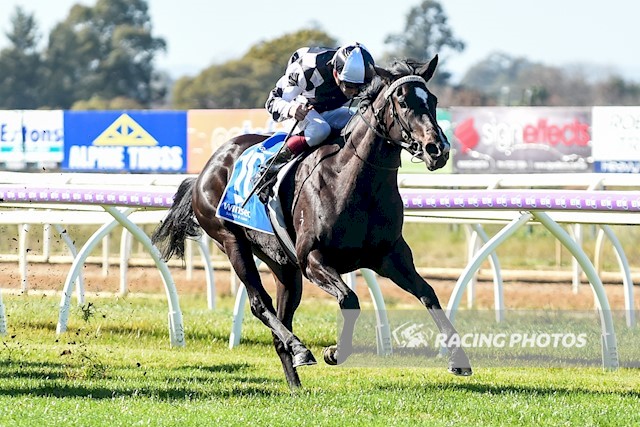 Toyz was on fire

Sent out an $18 chance, with Regan Bayliss in the saddle, Toyz On Fire sprinted quickly in the home straight to score a three-quarter length win in the Beteasy Maiden (1170m) beating Derive ($19), with Free Flying Star ($3.10 fav), two lengths away third.

Coming from an awkward gate of 10 in the field of 12, Bayliss was able to settle the filly in midfield before bringing her to the centre of the track turning for home.

The daughter of stallion Fighting Sun let down strongly and quickly gathered in the leaders. The runner-up trailed through on her back but was being comfortably held on the line.

Trainer Calvin McEvoy said Toyz On Fire was a nice filly which could measure up in tougher company.

“Early on she was quite immature,” McEvoy said.

“We didn’t really put too much pressure on in her early training because she was still very new and was also a bit fractious in the starting stalls.

“We gave her that time to mature and this preparation she has been really good.

“The filly did her early work at Angaston but showed enough to send her to our Melbourne stable.

“Her jump outs were good, and we looked for a suitable race to kick off and found today’s race at Wangaratta.

“We weren’t happy with the draw but there was a good run from the start so decided to go ahead.

“Regan rode her beautifully and the filly let down well.

“She tended to stargaze when she hit the lead, but it was a good win and I’m sure she can win better races.”