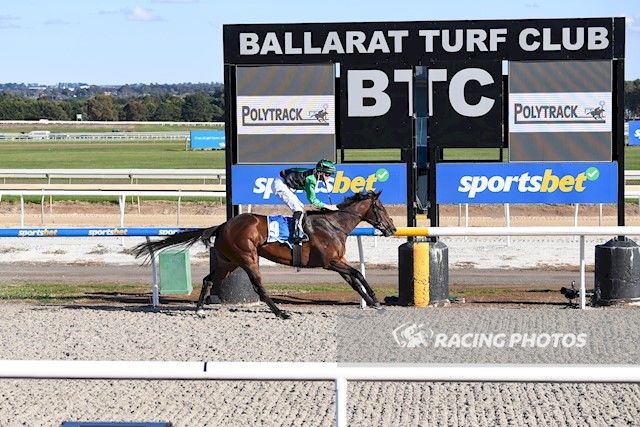 First starter Super Jenni Kay left nothing to chance with a brilliant six length victory on the Ballarat synthetic on Monday, May 23.

The three-year-old filly brought up a double for trainers Tony & Calvin McEvoy and jockey John Allen who had won earlier with Rose Tycoon.

Backed from $2.80 into $2 favourite, Super Jenni Kay was six lengths clear of her rivals in the Polytrack Three-Year-Old Maiden (1200m).

The filly jumped brilliantly to take the early lead, but Allen was happy to let the runner-up go to the front approaching the home turn.

He quickly brought Super Jenni Kay to the outside on straightening, and she let down beautifully to race clear.

“Physically she is very good and has done everything right.

“It is really good for connections, Steve Millar, who bred the filly, she is out of a great family, and Peter Robinson – a good result.

“She is a straightforward filly and handled really well today.

“It is important to give a shout out to all the staff, we’ve been under the pump a bit lately.

“We will probably go low again next start then have a look towards the end of the season if there is something stronger.

“If she can get some black type she is going to be very valuable.”

“I haven’t had much to do with her, but Calvin was very confident she would take a bit of beating and he was proved right.

“She really pinged the gates, I let one cross me then popped off its’ back.

“She travelled up well, and maybe I hit the front a bit soon, but she still let down very good.

“There was a nice tempo but she was doing it in her comfort zone which is probably the sign of a pretty decent filly.

“She did it quite easily.”