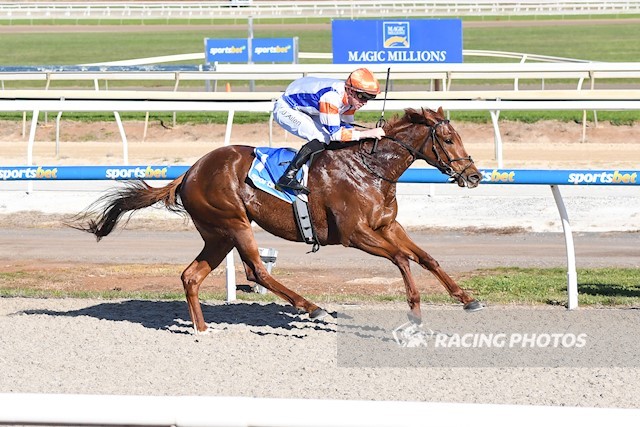 The highly talented Rose Tycoon broke through for her maiden victory on the Ballarat synthetic on Monday, May 23.

The Tony & Calvin McEvoy-trained mare was a certainty beaten when second on race debut at Murray Bridge in October last year.

At Ballarat today, rider John Allen was happy to keep her wide and out of trouble and she proved much too good for her rivals.

On the line, the daughter of Written Tycoon had three lengths to spare on second-placed Precious Socks ($6) with The Philosophiser ($6.50), 2-1/4 lengths away third.

Rose Tycoon jumped wide from her extreme outside draw and Allen was caught four wide early, so he eased back to take a trail.

Around the home turn he asked the mare to extend, and she raced away to win easily.

Trainer Calvin McEvoy was not surprised by the ease of victory of Rose Tycoon.

“It was a more difficult watch than I expected,” McEvoy said.

“She didn’t have that early speed and a few kicked up inside her.

“Johnny (John Allen) did the right thing and got her back to relax which can be a little difficult with her because she can be a touch strong.

“It worked out beautifully.

“She has been a little bit immature, had to have some surgery and we thank the ownership group for being so patient.

“We always knew she had a good amount of ability.

“She was one of the biggest certainties beaten you’ve ever seen on race debut at Murray Bridge then went to Moonee Valley and didn’t disgrace herself.

“I think she is in for a really good prep.

“We’ll take her through her grades and won’t put her in the deep end just yet, and probably keep her around the same distance.

“She got a bit warm pre-race and I thought it might have got to her,” Allen said.

“But she came back to me when I asked and relaxed.

“When she picked up was able to put the race away pretty easily.

“She finished off pretty well.”