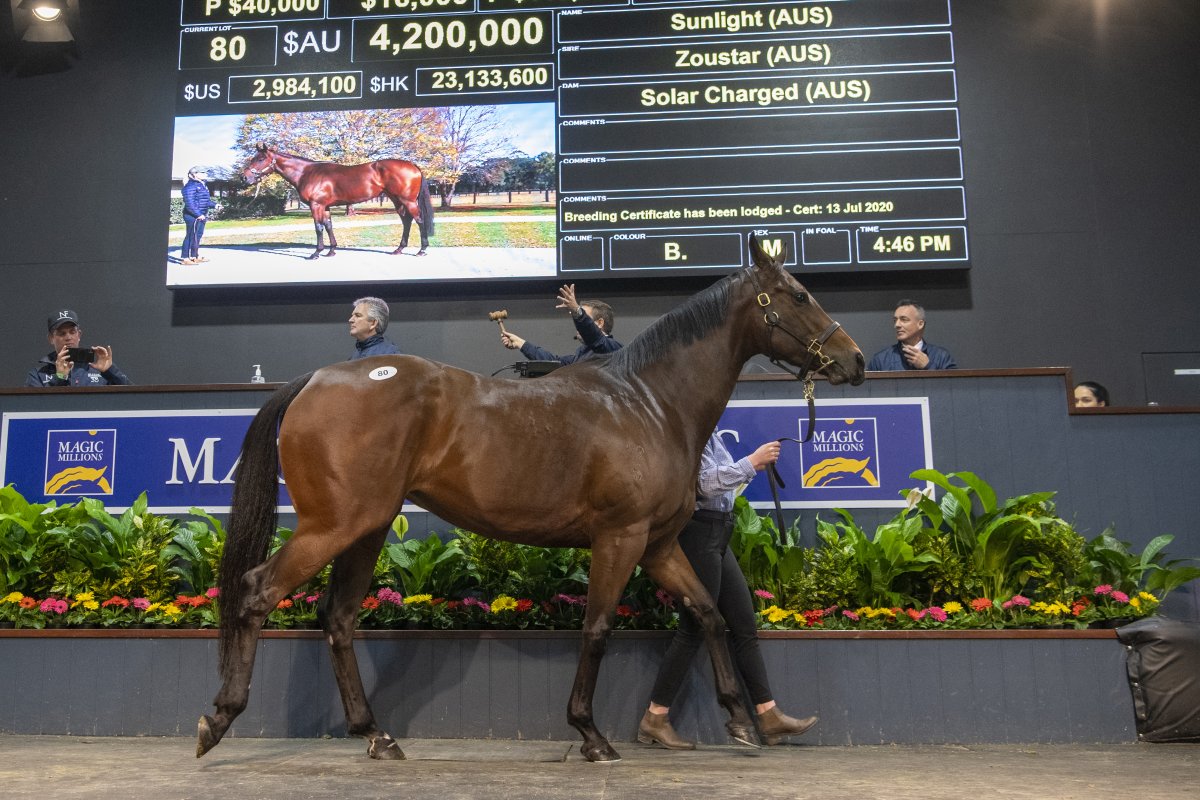 Champion mare Sunlight smashed the all time Magic Millions auction record when she sold for $4.2 million on a spectacular Day One of the National Broodmare Sale on the Gold Coast today.

Coolmore Stud’s Tom Magnier snapped up the mare and was among three seven figure purchases for his Hunter Valley operation.

“We are very lucky to have got her,” a delighted Magnier said of Sunlight. “She is a lovely looking mare and she was unbelievable on the racetrack, not only did she beat her own age, she beat the boys.”

“We are committed to Justify – he is the horse of a generation as well. He won the Triple Crown in America and retired unbeaten.”

“We really wanted to have her,” Magnier added. She is so good looking and we are trying to build a really serious broodmare band at Coolmore and if you are serious about that, you have to have mares like that in it.”

“We are delighted to have got her and hopefully we will have a bit of luck along the way,” he summed up.

Bidding started at $1 million and quickly went over $2 million before breaking through Listen Here’s all time Magic Millions record of $3.4 million. It was then she soared over the $3.85 million Southern Hemisphere record for a race filly or mare sold at public auction.

Sunlight’s purchase capped a remarkable ride for her connections who celebrated the record breaking purchase with tears and cheers.

The Zoustar mare was offered at the auction by Widden Stud, who acted as agent for her ownership group, a number of who were at the complex to shed tears and celebrate a wonderful race career.

Sunlight was led through the ring by her long time strapper and track rider Sarah Rutten who flew up from South Australia to play her part in a historic moment.

“I’m almost speechless. There were a lot of tears. It is very sad that I won’t see her as much but I’m excited she is staying in Australia and going to such a great home,” she said.

“It’s been a really great day of selling,” Magic Millions Managing Director Barry Bowditch said. “There was a real thirst for quality and it was great to have so many people involved – from those at the complex and those bidding online.”

“It was fantastic to be holding a live sale again and those in attendance really played their part on Day One.”

“Sunlight was an obvious highlight and it was fantastic to break so many records with her sale. We thank Tony and Calvin McEvoy, Widden Stud and all of her connections for giving us the opportunity to offer her for sale.”

“The international market got involved with Sunlight and showed the respect she deserved. I was bidding on the phone for the eventual underbidder from America.”

“Sunlight has always been a wonderful ambassador for Magic Millions. As a two-year-old she won the 2YO Classic and captured the Racing Women’s Bonus – it has been an amazing ride for all those connected with her.”