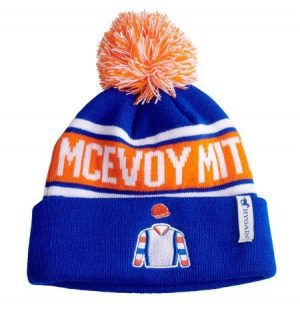 From every McEvoy Mitchell-branded beanie sold as part of the initiative, $10 will be donated to TRSA welfare initiatives, specifically equine-welfare research and event sponsorship for retired racehorses.

“Firstly, it’s come about because Tony (McEvoy) is such a proud South Australian and wants to support horse welfare in the state,” Tillett said.

“Animal welfare is obviously at the forefront of Tony’s mind at all times.

“But also the appointment of former MMR foreman, John Cornell as TRSA’s new equine welfare is another reason why the idea came up, given John worked at the stable for many years.”

Response to McEvoy Mitchell Racing’s sole previous “run” of beanies convinced those behind the idea it would be worth pursuing.

“We’ve only done one run of them and they were for our staff only, but they were hugely popular – everyone wanted one,” Mr Tillett said.

“So we thought that we could sell them, and any profit margin can go directly to horse welfare in South Australia.”

Mr Cornell is responsible for the tracking and traceability of thoroughbreds from birth, throughout their racing career and beyond. He is also responding to welfare concerns, providing proactive industry education on welfare best practice, and helping to improve the transition of thoroughbreds into retirement and careers after racing.

The role was created with the support of the State Government and the assistance of its previously announced $24 million industry stimulus package.

TRSA chief executive officer Nick Redin urged those within and outside the thoroughbred racing industry to purchase a beanie.

“When McEvoy Mitchell approached us about this we jumped on board immediately, given the initiative will benefit equine welfare,” Mr Redin said.

Mr Tillett said the beanie initiative is also being supported by Hygain Groups.

“They’re our feed supply merchants and they’re one of the most prominent feed suppliers in the game,” Mr Tillett said.

“They’re hugely passionate about horse welfare, in terms of research. I suggested the idea to them – because they partner up with us in a few things – and they loved the idea, so they’re contributing financially to each beanie as well.”