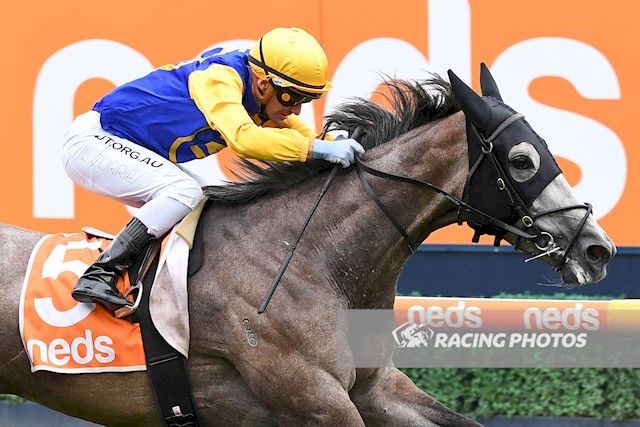 Star mare Silent Sovereign resumed from a spell with a brilliant win at Caulfield on Saturday, January 30.

Trained by Tony & Calvin McEvoy, the four-year-old mare had not raced since an excellent second in the Group 3 TAB SA Classic (2500m) at Morphettville on May 16 last year.

Following the race Silent Sovereign had fetlock surgery and a break.

The grey mare was readied for her racing return at the Kildalton Park Angaston complex before being sent to McEvoy Mitchell Racing’s new complex at Ballarat only five days before her race.

From gate one in the Robert Hunter Benchmark 78 Handicap (1400m), Silent Sovereign was given a great run midfield by Luke Currie before emerging in the home straight to grab the victory,

Trainer Calvin McEvoy said the daughter of Dalakhani had a very good fresh record and his father had suggested she would run well at Caulfield.

“That was fantastic today.

“I must thank the owners, the Moyle and Scroop families. She’s been a really good filly and now mare.

“She had to have a little bit of surgery on a fetlock and she’s come back in great order.

“She just travelled over from the Adelaide stable a few days ago and settled into Ballarat very well.

“I think she’ll continue to get better and we’ll just target some more black type for mares over the autumn.”

“She was good,” Currie said.

“Obviously first-up coming off a staying prep, she was nice and fresh.

“I had to bring her back as I didn’t want her racing into the box seat and the wheels spinning and being too close.

“I really had to work on her to get her to settle to come back another pair.

“She towed me around the corner it was just a matter of her finding a bit of room.

“The way she was going she was always going to show a turn-of-foot for 50 yards then run out because she was first-up.”