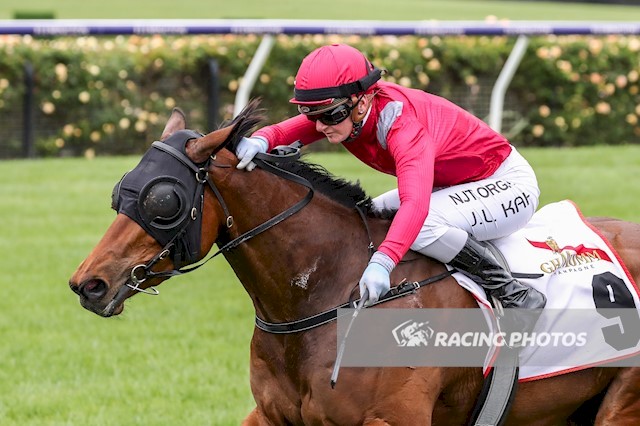 Victoria Quay stamped herself as a stayer of the future with a brilliant win in the Group 2 $300,00 G. H. Mumm Wakeful Stakes (2000m) at Flemington on Saturday, October 31.

Having only her fourth race start, Victoria Quay finished best to take out the three-year-old fillies feature on the opening day of the 2020 Melbourne Cup carnival.

Trained by Tony & Calvin McEvoy, the filly will now go for a spell rather than progress to the VRC Oaks (2500m) next Thursday.

“She is still immature, and it would be too much to expect her to back up on Thursday.”

Brilliantly ridden by Jamie Kah, Victoria Quay ($7) finished best to win by a neck from Personal ($3 fav) with Tyche Goddess ($51), 1-1/2 lengths away third.

Kah had the daughter of Dundeel away nicely and allowed her to settle midfield in the field of 14 before asking her to move up to the leaders on straightening.

In the drive to the finish, Kah switched the whip to her left hand and the filly responded to grab the lead close to home and win running away.

Calvin McEvoy said the trainers had no regrets regarding the decision to miss the Oaks and would seek Oaks classics next year.

“We didn’t pay up for the Oaks, it was a calculated decision. To do that at her fourth start, was just a huge effort, and what a ride by Jamie (Kah).”

Managing owner Suman Hedge said they would most likely spell Victoria Quay and set her for the Australasian Oaks at Morphettville in May.

For Jamie Kah, it was another important win for the McEvoys with whom she had a successful association in South Australia before relocating to Melbourne.

“I couldn’t have asked for a more perfect run,” Kah said.

“It was lovely in the end. On the turn she hit a bit of a flat spot – they told me she can do that – but she was in for the fight late and Flemington is the perfect track for her.”

Victoria Quay broke through for her maiden win at her second start over 1600 metres at Balaklava on September 16.

She stepped up with an excellent second to Ain’tnodeeldun in the Hill Smith Stakes (1800m) at Morphettville on October 10 before heading to Melbourne for her Group 2 victory.

The filly was a $250,000 yearling purchase at the 2019 Magic Millions Adelaide Yearling Sale for McEvoy Mitchell Racing jointly with Suman Hedge Bloodstock with the latter retaining a significant ownership percentage.