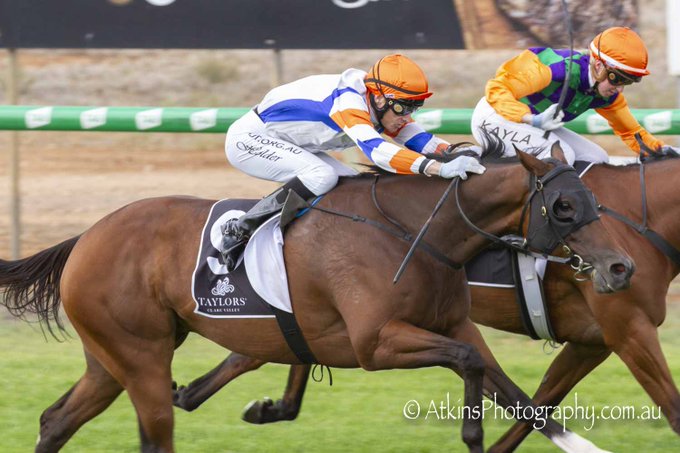 Patience may be about to pay off for owner Wayne Mitchell following the win of Pay The Man at Balaklava on Sunday, March 1.

It was virtually a perfect result for trainers Tony & Calvin McEvoy as their only two runners at the meeting ran the quinella in the Harold Lane Maiden (1600m).

The winner settled well back in the field of nine while the runner-up showed good speed to share the lead.

Turning for home, jockey Kayla Crowther urged Whirlwind Romance to go clear and they looked certain of victory until Pay The Man emerged out wide and sprinted strongly to grab victory.

“I always thought Pay The Man would get there,” John Cornell, SA stable foreman said.

“The long straight at Balaklava was going to be in her favour and she has a strong finish.”

Cornell said owner Wayne Mitchell would have been delighted by the win.

“She is a home bred being by Dundeel out of Wayne’s mare Evidentia.

“Pay The Man is bred to stay, and Wayne was always happy to give her as much time as she needed.

“At home, she has always indicated she had staying potential.

“But she is a big filly that has needed time and judging by her finishing burst today, Wayne’s patience looks like it is going to be rewarded.

“I thought her last run at Gawler indicated she was ready to step up.

“While most were watching her stablemate Our Deep Agenda which won the race, Pay The Man really hit the line strongly to finish fifth.

“So today, up to 1600 metres and the long straight was always going to suit her.”

“Tony & Calvin can now look at the calendar to frame a program for her, but I think Pay The Man can continue to improve.”