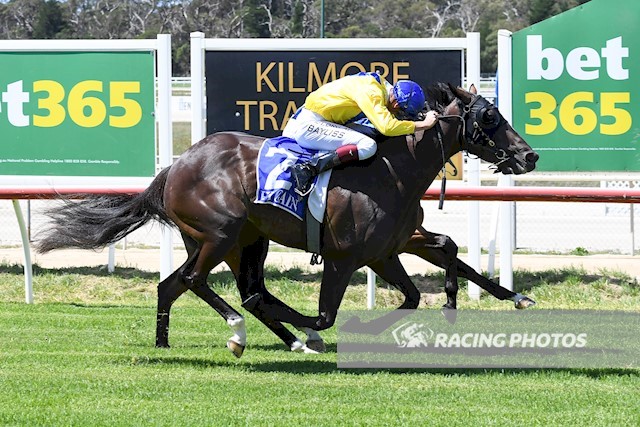 Talented filly Enood made it a perfect day at Kilmore for trainers Tony & Calvin McEvoy with a last stride win.

The McEvoys took two horses to the Kilmore meeting, newcomer Maccabee won the opening race, then Enood won the second.

A beautifully bred three-year-old filly, Enood has always shown promise but after a break now looks ready to realise her potential.

The filly was purchased by Sheikh Mohammed Bin Khalifa Al Maktoum at the 2018 Inglis Easter Yearling Sale for $1 million.

She had six runs before today for three placings but judging by the victory, it won’t be her last.

Enood ($6) settled back in the field of nine but was brought into the race by jockey Regan Bayliss around the home turn.

The filly had to fight hard with runner-up Bethpage ($3.90) in for a battle but on the line, she had a head to spare in winning the Bendigo Club Three-Year-Old Fillies Maiden (1100m). Third placed Groovy Kinda Love ($4.80) was 1-1/4 lengths away third.

Michael Shepherdson, Melbourne stable foreman for the McEvoys, was delighted Enood had scored her initial win.

“It was a really good return, a top effort,” Shepherdson said.

“She’s finally broke her maiden which takes a bit of pressure off.

“Tony & Calvin decided to give her a really good spell and let her mature.

“She was never really on the track today, so it was a good effort.

“Regan picked her up nicely and kept her as balanced as he good which helped her through the line.

“Early days we thought Enood might get out over a bit of a trip but this time in we have kept a bit of speed in her legs and it seemed to work out.”

“I sat three wide but she handled the track really well, handled the camber perfectly and was in a really good rhythm.

“It was a nice win and there are more in store.

“She didn’t have the early tow to go forward, so we had to take out medicine and get her into a nice rhythm.

“Enood was strong through the line and it was a good win.”