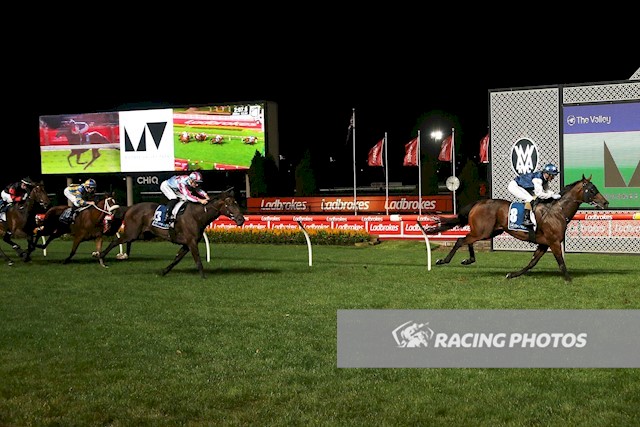 Promising middle distance galloper Outlandos made it two wins in a row with a dominant victory at Moonee Valley on Friday, February 5.

The addition of a barrier blanket by trainers Tony & Calvin McEvoy seems to have worked wonders on the four-year-old.

Perhaps surprisingly, stable jockey Luke Currie was having his first ride on Outlandos at Moonee Valley in the Mooneevalleypark.com.au Summer Stayers Series Heat 3 (2040m) but made it a good one.

Currie had Outlandos away well and settled third on the fence with the run of the race.

As the field sprinted past the 600 metre mark, Currie was able to angle away from the inside and once in the clear, Outlandos sprinted strongly to win racing away from his rivals.

Michael Shepherdson, manager of the Best And Fairest Syndicate, part-owners of Outlandos, was delighted to represent the trainers at Moonee Valley.

“That was really good,” Shepherdson said.

“Finally, he is really starting to show his potential.

“There wasn’t a lot of speed through the run and Luke (Currie) had a lapful most of the way.

“The way he angled out and got around them was great and he really let down and ran it out very strong.

“Luke really showed his experience, he didn’t panic on the rail, angled out and was very strong through the line – Luke’s a high-class jockey and we love having him on board.

“It is good to see this horse finally fulfil some of his potential.

“While his confidence is high, we might try and raise the bar again and see where we end up.”

“He was really good,” Currie said.

“I think Tony and Calvin have worked him out with the addition of the barrier blanket.

“At his last start he raced up a bit closer to the speed as he had been missing the start and getting back out of his ground, making it hard for himself.

“He needed a bit of luck in the run tonight.

“When the wave (of runners) took off, it broke them up a little bit and I was then able to come off the fence and make one good run at them.

“He was really strong through the line which was good to see.

“Jamie (Kah) had pushed the button to get around them and I came up on her back with a handful of horse.

“He only needed to show the turn of foot like he did last time, and he was going to be mighty hard to beat.

“The stable hasn’t been at Ballarat for very long and maybe he has turned the corner with the change of scenery there.”