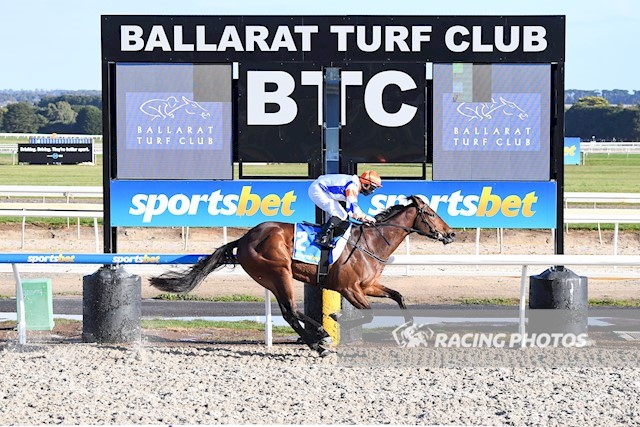 My Boy Birmingham a beauty

The “catch me if you can” tactics of My Boy Birmingham returned another winning dividend on the Ballarat Synthetic on Tuesday, July 20.

The Tony & Calvin McEvoy-trained three-year-old made it two wins on his home track with an all-the-way victory in the Porter Plant Class One Handicap (1500m).

In his maiden win, also over 1500 metres on June 7, the gelding went very hard establishing a good lead which his rivals couldn’t make up.

Today, he settled much better in front for jockey Dean Holland then gave a good kick on straightening to win easily.

“He outstayed them,” McEvoy said.

“He won here at his first career start and did a really good job.

“We then sent him to Adelaide for what looked a nice race, but nothing went right and he was quite disappointing.

“Full credit to the team, he has arrived back here, he’s settled in well, it has been a big team effort.

“He does a lot of his work on the treadmill, he presented fitter and it was nice to see him do that.

“We will try to pick out another race for him here on the synthetic, he seems to love it.

“He’s only got to walk across the road, and he is pretty tough, so we will try and keep him at the same distance.”

Winning jockey Dean Holland said My Boy Birmingham had been a more mature ride today than on debut.

“He had quite a few trials before his first start,” Holland said.

“The team has done a great job because he was hard work, really hard work actually, and he was ready to go at his first start.

“He did a lot wrong that day but got the job done.

“The trip away suited him because he has matured a little bit.

“He was a lot easier to handle today, and if he keeps racing consistently like that, he will go through his grades.”