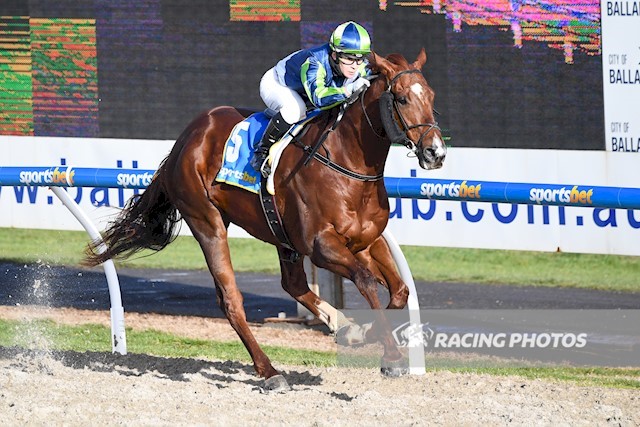 Vahash brought up a winning treble for trainers Tony & Calvin McEvoy with an all-the-way win on the Ballarat Synthetic on Tuesday, July 20.

A gear change and different race tactics enabled Vahash to bounce back into the winning list.

The five-year-old is very lightly raced and the victory was his third from just eight starts.

The McEvoys won earlier in the day with Festivus and My Boy Birmingham.

Vahash is part-owned by Darren Thomas of Seymour Bloodstock, who also is in the ownership of Festivus.

Ridden by apprentice Celine Gaudray, Vahash showed good speed from gate one to hold the inside and lead.

The gelding accelerated turning for home to win comfortably.

Trainer Calvin McEvoy was relieved Vahash showed what he had been doing in training.

“This makes it a beautiful day and well done to all the staff who worked very hard to get these results,” McEvoy said.

“We’ve been really confident with him going into every race this preparation, but things haven’t really been going to plan.

“He’s been getting back and quite disappointing.

“We thought, off wet tracks onto the synthetic, he’s been a bit keen in the blinkers, so we took them off and put winkers on.

“On the synthetic we were keen to roll forward today and luckily he brought his trackwork to the races.

“He gave a good kick at the top of the straight and I was very impressed with that.

“A big thank you to the owners who have been very patient.

“We actually gave Vahash a year off to let everything settle down as he had been going sore.

“He had always shown us a good amount of ability, and hopefully today is part of a repayment.

“We will work him up through his grades, he was down to a 58 today but we think he is better than that.”

Apprentice Celine Gaudray was the winning jockey at just her second ride for the McEvoys.

“It was good to have barrier one and he was really happy out the front.

“He is a really big striding horse so I just let him work into it nicely.

“He travelled really nicely today, and relaxed out in front, and first time on the synthetic, he really liked it.

“He will definitely win a few more races.”