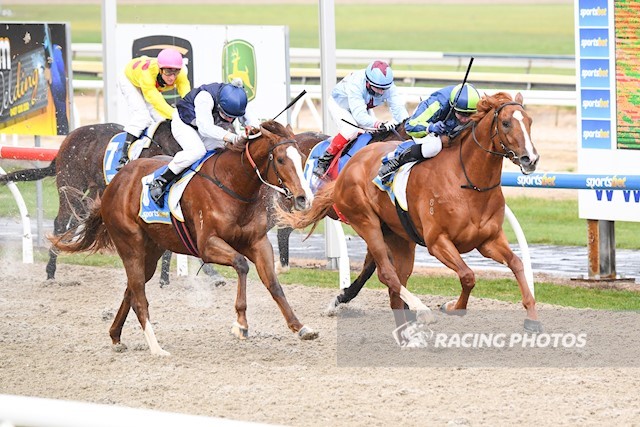 Festivus has a future

Festivus marked himself as a colt of the future with a game win on the Ballarat Synthetic on Tuesday, July 20.

Only a two-year-old, Festivus took on the older horses to win The Haymarket Maiden (1500m) at just his second start.

Trained by Tony and Calvin McEvoy, the colt started $2.30 favourite and was ridden by John Allen.

The jockey took Festivus forward after the gates opened to sit second and looked to be cruising on the home turn when he moved up to the leader.

However, once asked for an effort, he wanted to run around a bit and looked unsure about how to put the field away.

Allen rode hard and Festivus responded when challenged to score a half head win from Shoot Ur Shot ($15) with Sir Phoenix ($16), 1-1/2 lengths away third.

Trainer Calvin McEvoy believes the colt has a lot of upside.

“It proved to be a bit of a worrying watch up the home straight,” McEvoy said.

“I think there is a lot more under the hood.

“We just saw a very green horse who did not know what he was doing.

“Just rolling forward early on the synthetic might have taken his finish away.

“I definitely think he will be a better horse ridden with a sit, but I could see why Johnny (Allen) did that today.

“It will be interesting to see Festivus’ condition post-race because he is a hard horse to get a gauge on at home as he does everything so easily.

“We’ll have a chat with the owners to see what they want to do but we have a good opinion of him and think he can be a player in some better races.

“We’ve got to work out the best thing to do now is whether to back off and come back late spring or whether we go for another race for his experience.

“He’s absolutely got the ability and I think with more racing he’ll pick it up.”

“I trialled him before his first up run and he was very green and raw,” Allen said.

“He was really green when he hit that wind in the home straight today.

“To his credit, when he was challenged late he put his head down and battled to the line.

“He is still only a two-year-old, and I’m sure he will make a nicer three-year-old so he should be a nice horse over ground in the future.

“He’s a nice type, a lovely moving horse, beautifully balanced so you would imagine he would press on.

“He’ll get over further for sure, he’s only a two-year-old and he’s getting over 1500 metres this early in his career, so as a three-year-old you would imagine you would see him over more of a staying trip.

Festivus was purchased by McEvoy Mitchell Racing in partnership with Belmont Bloodstock from the 2020 Karaka National Yearling Sale for $NZ250,000.