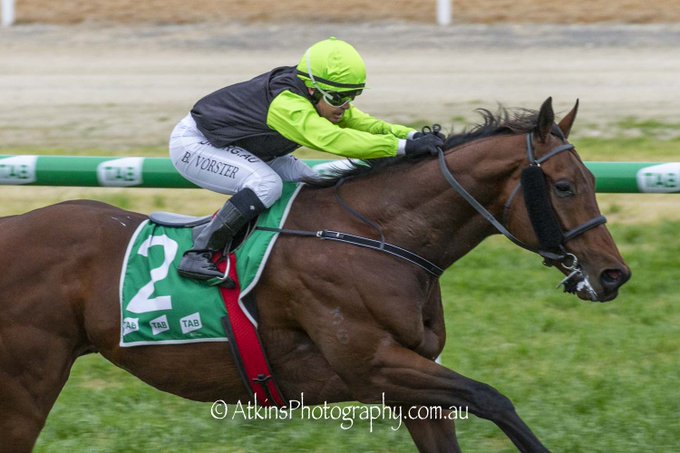 Trainer Tony McEvoy handed out a tip when Royalty scored a strong win at Murray Bridge on Wednesday, July 22.

McEvoy said there was more to come with the three-year-old after gelding won the Bridges Event Central Rating 62 Handicap (1200m).

Royalty ($2.60 fav) brought up a Murray Bridge treble for trainers Tony & Calvin McEvoy and jockey Barend Vorster in scoring by 1-1/4 lengths from Conconi ($10) with High Mist ($10) a head away third.

The trio had previously won the opening two races with Celestine and Born To Play.

Vorster was positive on Royalty sitting off the rails but sharing the lead before asking him to extend in the home straight.

Despite being in front all the way up the straight the gelding comfortably held his rivals to win well.

McEvoy said it had been a good day at the office for McEvoy Mitchell Racing with three wins and two placings from the stable’s five runners.

“They get their chance on this big beautiful circumference and this was a nice way to finish the day for us.

“There didn’t look to be a lot of pace on paper to us and so Barend was keen to take control of the race.

“I thought the best thing I could do was leave it to him.

“He’s a big lump. He’s a huge horse, he’s only three and he hasn’t run to his ability yet.

“I think he’s spending all his energy into growth, and I think there’s a lot more to come.”

McEvoy said he had been aggressive in his placement of Royalty in the horse’s initial preparation because he rated him so highly.

“He was working like a horse which could run in the Carbine Club Stakes during the Melbourne Cup carnival but under race day pressure he couldn’t put it all together.

“But it will come.

“A few of the owners couldn’t wait any longer and they got out, sadly for them.

“The ones that have stayed in and increased their take, I think they are going to be rewarded.

“I know we are still in a small race here but there is more to come.”

“It’s a beautiful track and gives the best horses a chance,” Vorster said.

“Even a horse like this (Royalty), drawn out wide, there was no reason to panic.

“He’s a better horse just being let slide along, let him breathe nicely.

“Turning for home he was full of running, just waiting for me to let him down.

“When I walked the track earlier, right on the fence looked a little bit rough to me.

“It was a case of keeping him comfortable in himself, it is just the way I ride them where they are going well.”