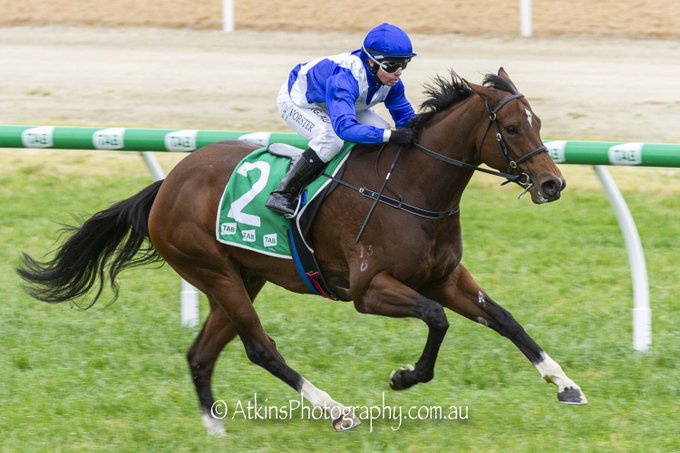 After opening at $2.80, Born To Play was smashed into $1.70 favourite and gave her backers little cause for concern scoring by a length from Mrs Mourinho ($3.30) with Passing Phase ($16) a massive 6-1/4 lengths away third.

The McEvoys and Vorster won the opening race with Celestine and Born To Play raced similar.

The three-year-old filly jumped away nicely and settled in the leading group before Vorster sent her for the post in the home straight.

Although the runner up got to within a length, Born To Play always looked in control and was eased down over the final stages.

Trainer Tony McEvoy believes the filly has a bit of a future.

“It was a dawdle early,” McEvoy said.

“She was a bit keen early, our girl, she wanted to go a bit faster.

“She is a really good quality filly – a gorgeous filly to look at, beautiful pedigree and owned by John Singleton.

“She came down to us and was a bit stiff first up but put paid to them today.

“I think she will get better when she gets to a little bit further as well.”

McEvoy said he was still feeling his way with Born To Play.

“She is a quality filly that is probably going to be better at 1400 and 1600 metres is what I am seeing even though she looked to over race a bit there today.

“I think she will be better in a race that’s got some tempo.

“John Singleton breeds quality and I’m pleased to be able to train for him.”

Winning jockey Barend Vorster said it had been a slow tempo early.

“She began alright, but she doesn’t have that first 100 metres initial tow.

“So, with not too much early pace on it gave her a chance to get into the bridle.

“It was nice for me to just take my time and let her bowl up to her own momentum.

“We always felt she was going to be strong for this lot, I wanted to keep her out and comfortable and she proved that.

“I actually thought she ran a little bit below par at her first run for me.

“In her work she’s given me the feel like what she did today so I’m just happy she has come here on race day and shown it.

“She is a nice, balanced filly and the better going might have also suited her today.