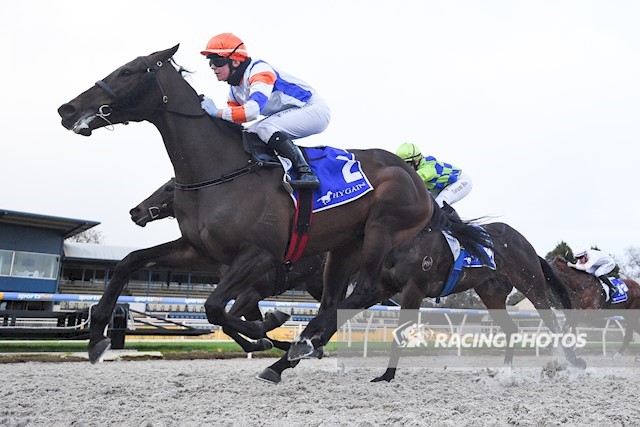 Mayan brought up a double for trainers Tony & Calvin McEvoy at the Ballarat Synthetic meeting on Friday, August 6.

Following Jucconi’s win earlier in the day, Mayan made it a double with a strong win in the Hygain Winners Choice Benchmark 64 Handicap (1100m).

As with Jucconi, the winner was ridden by apprentice Celine Gaudray.

The victory continued an excellent strike rate on the Ballarat Synthetic track for runners from the Tony & Calvin McEvoy stable.

Mayan was the 12th winner from the past 25 starts for a return of nearly 50%.

Trainer Calvin McEvoy proved a good judge as he threw out Mayan as a strong winning chance on the television channel Racing.com.

Despite his confidence, the winner started at $13 in beating Emerald Crown by a half-length with Bianconi Magic a head away third.

Calvin McEvoy was not surprised by the win.

“He hit a wet track and hated it. We took him to Moonee Valley, and he couldn’t get out of his own way.

“Here on the synthetic it was really nice, and a big shout out to the team, he presented really well and in good order.

“He will certainly appreciate getting out a little bit further and he was strong through the line.

“A shout out to my mother (Jo), bless her, she has got a syndicate and they own a part of this horse.

“We won’t be going to a wet track with him that is for sure.

“We’ll take him through his grades.

“Mayan was stakes-placed as a two-year-old, he’s got talent and is a lovely type of horse.

“We’ll try and pick off a few races and get some points up and see where he takes us.

“Mayan was a bit immature early on, we gave him time and thanks to the owners for that.

“He’s a lovely sound horse now and can go on with it.”

The victory gave Gaudray a treble, two of them on McEvoy runners.

“It has been a really good day,” Gaudray said.

“He jumped really well, and I thought I would be forward but then a fair bit of pressure came from out wide.

“So, I thought I would let them fight for the lead take an easy run behind them then come out wide.

“He was just too strong.

“Once the others came out wide late, he kicked again and finished off nicely.”