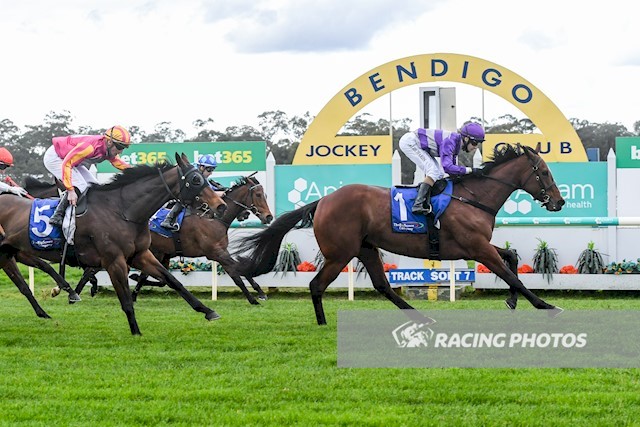 The mare indicated they might be right with an impressive victory at Bendigo on Sunday, August 8.

Apprentice rider Josh Richards followed pre-race tactics to perfection to land the mare a winner from Vitani ($4.80) with Ilalliqa ($2.70 fav) a neck away third.

Trainer Tony McEvoy felt Meehni could now go on with her form.

“We were probably over training her in the past, so we’ve kept her a bit fresher this preparation.

“She looks so much better, carrying more weight and that was a really good win.

“I must commend this boy, young Josh (Richards).

“I had a walk of the track and said I didn’t like the inside two lanes so told him to keep her wide and if you can get some cover do so.

“He did it so beautifully, and smoothly, then showed great patience and he’s an impressive young rider.

“She wobbled around a little bit (in the home straight) so if she can straighten that out, she could be even better.”

McEvoy said the trainers would likely keep Meehni to 1600 metres and under because if they wanted to go further they would have to train her.

“I think she is enjoying not being trained so I think we’ll stay around the 1600 metres.”

Josh Richards, the winning jockey was delighted with Meehni’s win.

“She had a lovely run there today,” Richards said.

“She was three-deep with cover, and I just had to be patient.

“She got a little bump on the corner and became unbalanced.

“But once she balanced up, she was still putting it together so she can definitely improve.

“She wanted to get out (in the home straight), she’s still a bit green, once she straightens that out, she will definitely improve.

“It is great. Tony & Calvin have been giving me plenty of support and it is great to get a result for them.”

Meehni looked impressive winning her maiden by nearly five lengths at Balaklava in May last year but could only notch five placings from her next seven starts.

This time in she is two wins from as many outings