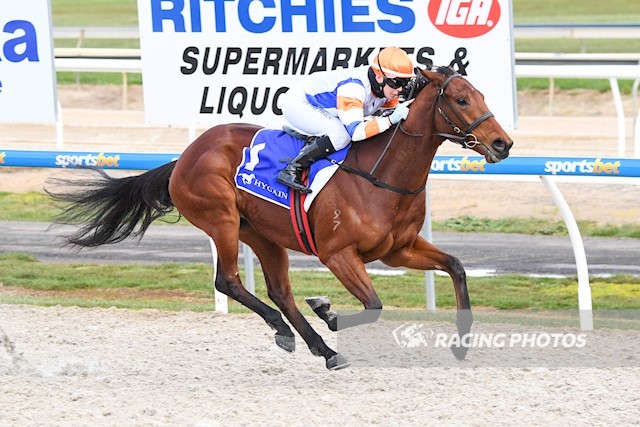 Jucconi kicked another goal for connections with a dominant victory on the Ballarat Synthetic track on Friday, August 6.

The Tony & Calvin McEvoy-trained four-year-old was a winner on debut on the Pakenham Synthetic on July 10 and followed up today with an impressive effort.

Gaudray had the gelding away well and was happy to sit third early before coming wide on the home turn and moving up to challenge the leaders.

Trainer Calvin McEvoy was delighted the son of Nicconi made it two wins from two starts.

“It was super,” McEvoy said.

“He’s still got a bit to learn but it was a nice ride.

“He wanted to get in a little bit which he can do but it was a good strong win and worked out well.

“He already wears a near side bubble cheeker but with experience I think he will get out of laying in.

“Jucconi is a nice horse but we’ll probably take the pressure off now.

“He’s done a good job and we will probably put him away during the spring and bring him back in the summer.

“A couple of the Port (Adelaide) boys are in this horse and they have been putting a lot of pressure on me, so a shout out to them and it was a nice win.

“It is Jucconi’s first real racing prep, and it took us a little while to get him here, but I think a break now and a bit of sun on his back he’ll mature up and come back really nice next time.

“Leading last start did surprise me a little bit, but I think he will continue to step out and get up to a mile.”

Winning jockey Celine Gaudray was confident of a victory a long way out.

“I was very happy with the spot I was in,” Gaudray said.

“I just let him jump and find his feet.

“I was behind the leaders and he relaxed really nicely for me.

“He is still a little bit green, but he will improve with race experience.

“He’s a nice horse and definitely on an upward spiral.”