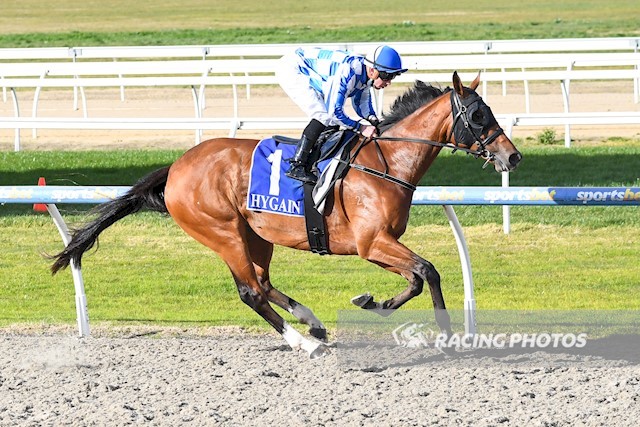 The five-year-old mare was the stable’s first runner for the season and ran out an easy winner of the Pakenham Mazda Benchmark 70 Handicap (2200m).

Heaven’s Gift did early racing in Western Australia before being transferred to Tony & Calvin McEvoy for this preparation.

Rayan Moore, Racing Manager for McEvoy Mitchell Racing, said he had been impressed by the mare’s win.

“It was very satisfying,” Moore said.

“She was sent over in good order from Holly Locke in WA.

“It was really encouraging to see her do that today.

“She got in an unfavorable position last start, by no fault of Madison (Lloyd, her jockey), she just got shuffled back.

“Both of her last two runs have been on the soft ground so to get back on top of the ground definitely helped.

“We work on the polytrack at Ballarat she has had a good bit of practice on that.”

Moore said the decision had been made by the McEvoys to take her tongue tie off.

“Her previous form in WA she didn’t race with a tongue tie do we went back to basics with her, and it worked a treat.

“I think there are more wins in store.”

“Calvin (McEvoy) sent me out there with an open mind,” Holland said.

“It was always going to be a tactical race sand I just wanted to ride the horse where she was happy.

“We ended up with a good run and had the race in our keeping a long way out.

“She probably just waited for them a little bit up the home straight.

“I know she won well but I think she had more up her sleeve.

“She’ll progressively get better, she’s got a couple more wins in her, that’s for sure.”

Heaven’s Gift now has three wins and four placings from just 11 starts and can build on that record.