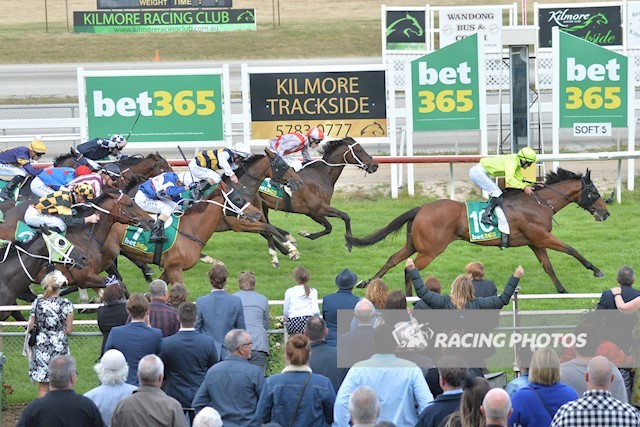 Manuel is now fulfilling the promise trainer Tony McEvoy has always suggested he had.

The win brought up a Kilmore double for McEvoy and Currie who had combined earlier in the day to win with newcomer Blow Torch.

Early in his career, the five-year-old might well have been compared to his namesake, the bumbling waiter from the television series Fawlty Towers but McEvoy kept the faith.

After having the ultimate ‘gear’ change, Manuel is now delivering.

The son of Commands controlled from the front for the last 1000 metres and while several challengers emerged across the track at the 200m, he kicked clear to defeat Torgersen ($17) by 1-1/4 lengths with Fastnet Tempest ($8) closing into third a neck away.

Victorian stable foreman Michael Shepherdson said it had been a courageous win.

“It wasn’t easy, Shepherdson said, “he had to work for the first half of the race.

“Then he was strong to the line up the home straight and repelled all the challenges.

“He’s been really consistent this preparation and since he’s been gelded really his form has been great. It has added to his maturity and has him concentrating in his races,” Shepherdson said.

“He’s always threatened to win a nice race and today he’s done it.”

Winning jockey Luke Currie said he made the decision to go forward and find the lead as the field was settling down.

“He came from a wide gate but after beginning well I let him keep flowing and trusted the horse,” Currie said.

“Tony had him rock hard fit for today and he did it with ease at the finish.

“When they came at him in the home straight, I felt him give a kick and he was strong at the finish.”