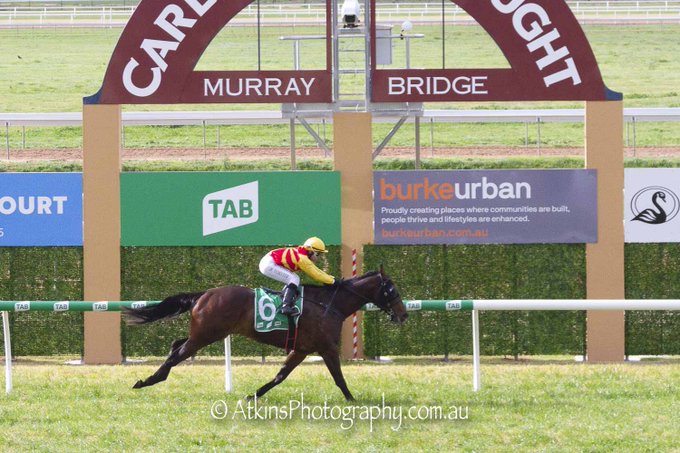 Hypersonic lives up to name

The Tony & Calvin McEvoy-trained debutant Hypersonic lived up to his name with an impressive victory at Murray Bridge on Saturday, July 4.

While the word hypersonic might mean faster than the speed of sound, the three-year-old racehorse was certainly faster than his rivals in the Isabelle Cappelliri Maiden (900m).

The gelded son of Brazen Beau did not begin quickly from his inside gate three but accelerated to take a good sit on the inside behind the leaders turning for home.

Vorster was able to angle Hypersonic around the leader and the gelding sprinted quickly putting a margin on his rivals.

Trainer Tony McEvoy explained it had been a long wait to get Hypersonic to the racetrack.

“I’ve got to send a cheerio and a big thank you to the owners,” McEvoy said.

“I took this fellow to the Gold Coast for the Magic Millions in 2019 – that was what he was showing us early.

“He won a trial at Doomben one day against the older sprinters as a baby and we knew we had a really talented horse, but he just jarred up on us and we couldn’t get him there.

“We had to wait and come back, got him going again and he won a trial at Tatura really nicely in December last year, then he jarred up again and told us he wasn’t ready.

“So, a big thank you to the owners for trusting us with him and doing what we had to do to get the horse through.”

McEvoy said he was delighted for major owners Sash and Lou Petrevski.

“They are really good supporters of ours.

“They’ve got a big cleaning business in Australia, they clean all the racecourses and football stadiums, and are passionate, passionate racegoers.

“They’ve been a great support to our stable and I thank them for it.”

Winning jockey Barend Vorster said it had been good to get Hypersonic to the races.

“Being a new horse, he was quite ready to go and he was a little bit on his toes,” Vorster said.

“He didn’t fly but he still did begin alright.

“Obviously in those 900 metre races they get going.

“I wanted him to be sensible in behind a couple and he was that.

“Although he was a bit keen, he was sensible, and I just waited for the gap to open.

“With first starters it is always hard to ask them to really quicken up as quickly as this bloke did today.

“When he gave me the acceleration, I was happy to just let him stride along.

“Obviously in the last 100 by himself he had a little bit of a look, but he was still quite professional, and I like him.”