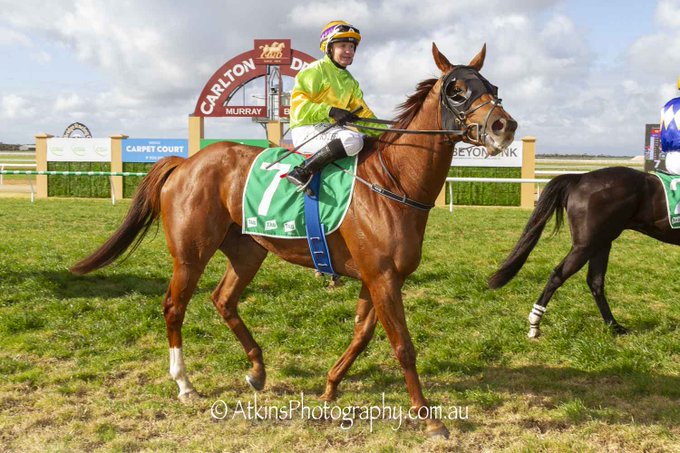 Winning Partner brought up a Murray Bridge double for the trainers having won the opening event with the promising Hypersonic. It was also a double for jockey Barend Vorster.

Trainer Tony McEvoy was delighted to celebrate the McEvoy Mitchell Racing milestone with another win.

“We’ve built a good team of horses and when The Brumby won here recently it was our 1000th winner.

McEvoy said he had made a gear change to try and help Winning Partner at Murray Bridge.

“He was a bit saucy first-up.

“He wanted to over race and really gave Barend a torrid ride, he was just a bit fresh.

“We put a cross nose band on him today and I told Barend to be so cool early and the horse relaxed nicely.

“He’s not a 1200 metre horse but I was too nervous to go further after what he did the other day.

“It was a really strong win.”

“It is just a matter of getting him there mentally,” Vorster said.

“He has to learn he doesn’t have to do it upside down.

“I was a bit frustrated with myself last time he began so nice and easily last time but there was no pace.

“I couldn’t get any cover and he got there too early and I let him slide but first up he had had enough.

“Today, we changed the tactics around and he complied with it.

“He came back with me and settled beautifully.

“It took him a little while in the home straight to really find his straps but past the post he was really strong.

“Hopefully we have him in the right manners now and he’ll improve from here.”