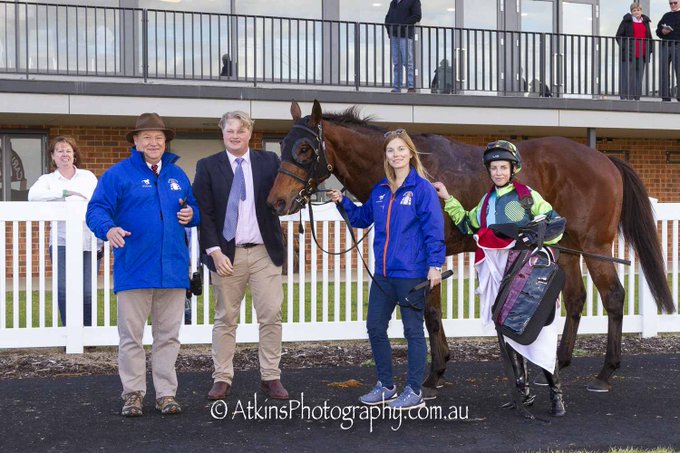 Blow Torch was rewarded his consistency with a game win at Murray Bridge on Saturday, July 4.

It was a great return for the large group of owners which includes members of the Dare To Dream syndicate, including Ian and Karen Pettinger. It is a promotion organised by Thoroughbred Racing South Australia.

After a string of four minor placings, Blow Torch proved too strong today in the Weddings At Bridges Event Centre Benchmark 58 Handicap (1600m).

Ridden by apprentice Jess Eaton, the four-year-old, the $3.50 favourite, scored a neck win from Classy Joe ($9) with Near Magic ($16), two lengths away third.

Eaton had Blow Torch away nicely and have him in a good rhythm just behind the leaders, but caught a little wide, on settling down before asking him to challenge for the lead turning for home.

Blow Torch responded to her riding and outstayed the runner up over the final 300 metres.

The win brought up a treble for trainers Tony & Calvin McEvoy who had won previously with Hypersonic and Winning Partner.

Trainer Calvin McEvoy said it had been a great win by Blow Torch.

“It was fantastic for this horse, he had been knocking on the door,” McEvoy said.

“He has been a bit unlucky, but it was great to get a win for the Dare To Dream syndicate which is a fantastic iniaitive put on by TRSA.

“It was a good ride by Jess, and she is keen to come and ride work one morning a week at Kildalton Park.

“We are very open to that as she rides very well as we saw today.

“It was really good for this horse, he’s been knocking on the door and the owners have been patient.

“He’s been running so consistently without getting a win, so it was very pleasing today.

“He had a real dog fight at the end and came out on top.”

The win was a wonderful introduction to a stint in South Australia for Victorian apprentice Jess Eaton.

“When you are on the back of one of Tony and Calvin’s you know they are going to be tough and honest,” Eaton said.

“Blow Torch was exactly that today.

“I thought there would be a bit more speed out wide and with that had hoped to be able to slot in.

“Obviously that didn’t work out, but he was happy and did no work to be there.

“I was worried he would be vulnerable late with the strong wind out there, but to his credit, he was tough.

“I think it worked out well that the horse on his inside was equally tough and keep him honest to the line.”