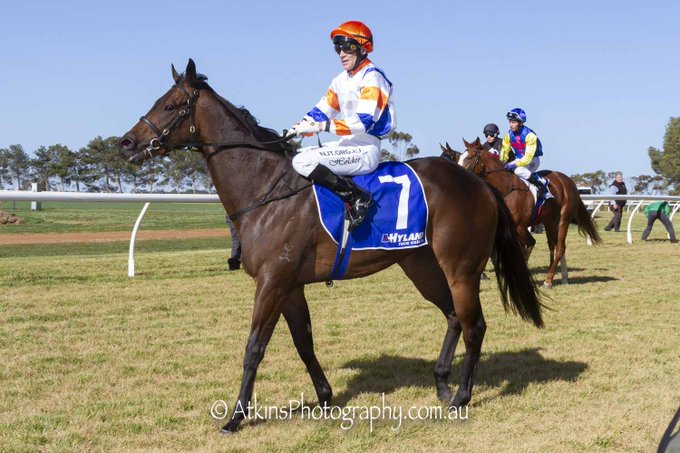 The Krone proves too strong

The education of promising two-year-old The Krone took a positive step forward with a strong victory at Balaklava on Wednesday, July 1.

Trained by Tony & Calvin McEvoy, The Krone powered home to win the BTR Excavation Handicap (1400m), a class one event for two and three-year-olds.

Ridden by Jason Holder, the gelding, a $3 chance, came from well back in the field of nine to score a long neck win from Graciebird ($7) with stablemate Mr Wolf ($1.90 fav) a similar margin away third.

At his first two runs, The Krone had raced a bit keenly before finishing second on each occasion, and the trainers wanted to teach him to settle better.

Holder allowed him to bowl out of the gates and was happy to settle at the tail of the field before asking him to improve turning for home.

The Krone warmed to his task and ran down the leaders to score nicely.

Trainer Tony McEvoy believes the winner is still a work in progress.

“He’s just got to learn how to race, this fellow,” McEvoy said.

“He’s been over-racing and not breathing, and not finishing.

“I asked Jason to ride him more patient today, but it was a bit of a tough job for him as the horse didn’t want to do that.

“He eventually came back and finished the race off really strong.

“He learnt nothing at his first start then he came out at his next start and wanted to do the same, he never breathed and over-raced and was soft at the finish.

“He was better today, and he’ll be better again now that he’s had that run at 1400 metres.

“The Krone will go to the Oaklands Plate and will be better again.”