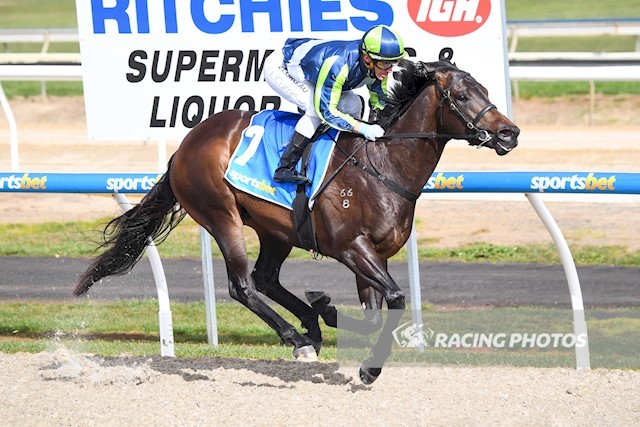 Debutant Red Hawk lived up to all the pre-race hype with a brilliant win on the Ballarat Synthetic on Monday, August 16.

Backed from $1.70 into $1.45 favourite, Red Hawk, trained by Tony & Calvin McEvoy, raced away from his rivals to score a six-length win in the Spirit of Valour @ Rylands Thoroughbreds Maiden (1000m).

Ridden by Luke Currie, the three-year-old colt was moderately away but showed great acceleration to cross over and find the front.

After impressive trials and jump outs, Red Hawk had been expected to win and trainer Tony McEvoy was relieved post-race.

“That was perfect,” McEvoy said.

“He’s a horse we love but there are always butterflies when you bring a really good quality colt to the races that he doesn’t make any mistakes.

“We needed to see it on gameday pressure, and I was suitably impressed with him.

“He jumped only fair I thought at the start and Luke summed up his options.

“But when he decided to go forward, he went forward very quick, he’s got a lot of speed.

“We had an ownership change in this horse recently through a deceased estate.

“I just want to say a big thank you to Mark Pilkington and Darren Thomas from Seymour Bloodstock, Wayne Mitchell who is my business partner and Cameron Arthur who stepped up and said we’ll buy this colt.

“Mark Pilkington and myself picked him out (at the yearling sales), a quality horse and we loved him and had to pay for him ($260,000) of course, it is a lot of money but I’m glad we did.

“He wants to run. It is a great quality to have in Australian racing, to have speed. I’m going to leave his speed alone and we’ll just stay there until he tells us otherwise.”

“He was good, I like him, he wouldn’t have been out of place at Caulfield on Saturday, but this was a nice race to bring him to and kick off.

“He got a little bit wrong out of the machine.

“He wanted to run away from them a little bit not having anything outside him, if they do that at Caulfield first go, they don’t win.

“It was nice he was able to get over that and still win, quite well.

“From where he was early, he could have just sat up outside them, but I know brilliant he is.

“He actually surprised me how quick he got across them today.

“When he got there (the front), he pricked his ears and cruised along.

”It was nice and easy and a good education for him.

“He’s always shown good ability and he is definitely above average. The sky’s the limit.”