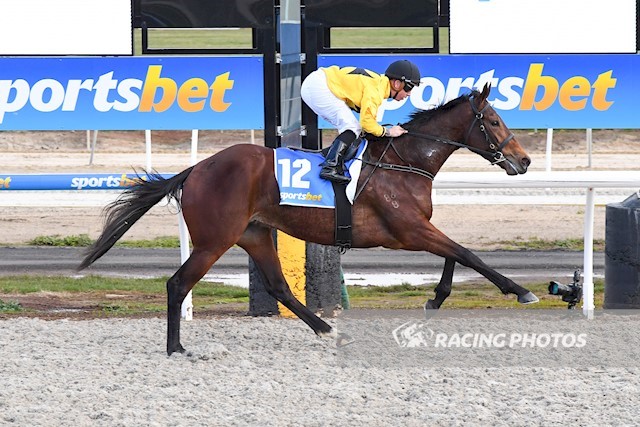 Trainers Tony & Calvin McEvoy believe three-year-old filly Star of Chaos is on the rise following an effortless win on the Ballarat Synthetic on Monday, August 16.

Following a win with Red Hawk two races earlier, Star of Chaos made it double for the trainers taking out the Porter Plant Maiden (1200m).

Ridden by Dean Holland, the filly ($6.50) sat second early before careering away in the home straight to win by six lengths from Hackeress ($61) with Hot Trim ($26) a half-length away third.

Star of Chaos began well and Holland quickly had her in second spot before asking the filly to sprint for home over the final 400 metres and she dashed away.

Trainer Tony McEvoy was a little surprised by the ease of the win.

“She was fabulous,” McEvoy said.

“She’s been going really nicely but I was a bit concerned about the 1200 (metres, first up) whether it would be sharp enough.

“Star of Chaos has been a filly I’ve always had a bit of time for.

“I ran her in the Adelaide Magic Millions, and she ran well below what I thought, and I was very disappointed.

“As it has turned out, the form out of that race has been really strong.

“She has matured a little bit and that was super impressive there today.

“I will have to reassess what to do with her after that win.

“A big thank you to Paul and Bindi Frampton and Antony Thompson – we bought a few fillies, and the others didn’t quite come up as we wanted, and they hung in there with this filly, and I thank them for that.

“I was a little bit surprised by the authority of the win at 1200m.

“They are quite solid these races at this time of the year, you come to a maiden and think you will win easily, you have got another thing coming.

“I thought she was fabulous, I knew she had it in her, but I didn’t quite expect it today.”

Dean Holland, winning jockey, had been confident a long way from home.

“It was a straightforward win,” Holland said.

“She ran down the line on a softish track in Adelaide at her other run.

“On the synthetic today she knew her way around and it made my job very easily.

“It is hard to do that (win by six lengths) as a young horse.

“Once I landed outside the leader, I always thought I had the race there to win but they have still got to let down when you ask them to.

“I didn’t have to do too much to persuade her to let down and was able to ease up on the line.

“I’m not shocked she won like that but it was great to see her do it.”

Holland said he was enjoying riding for the McEvoy team.