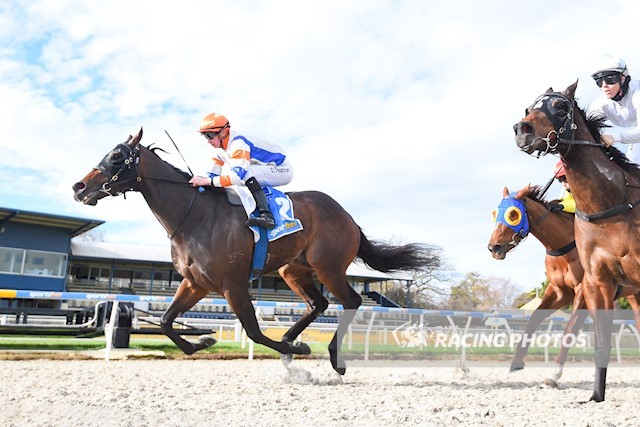 The Difference returned to the winning list on the Ballarat Synthetic on Tuesday, August 10.

Despite being slowly away, The Difference finished best to win the Porter Plant Benchmark 78 Handicap (1000m).

Ridden by Damien Thornton, the Tony & Calvin McEvoy-trained six-year-old, a $3.70 chance, scored a three-quarter length win from The Mobot ($2.05 fav) with Madame Bolli ($5.50), a half-length away third.

The Difference was a shade slow to step in the small field of six, but Thornton was able to slot him into a perfect one-out, one-back position.

When the field sprinted for home, the gelding took a while to wind up but finished strongly over the last 100 metres to win running away.

“I think today confirmed the soft going is not his go,” McEvoy said.

“If you look at his old form, he has run okay in it, but today he was very good.

“He had to chase those horses down hard and he wanted to win.

“A big shout out to Steve and Amanda at Rosehill Park, their strike rate is incredible for us.

“When you train in a complex in a training centre, you go to the track every day.

“Even though Ballarat offers more variety than most places, just to get them away from the track where they can wander around an arena or a dam or paddock, it is really good for their psyche.

“It is really good for their head; they are fit and all you have to do is work on their brain and their happiness and those guys are doing it tremendously for us.”

Damien Thornton, winning jockey, said The Difference had been restless in the barrier stalls.

“He didn’t want to stand that straight and was mucking around with his head,” Thornton said.

“He probably was never going to step well.

“Sometimes there is only so much you can do for them and have to hope for the best.

“Today it worked out all right in the end, still found a nice spot.

“He travelled okay for 100 metres, but they kept the pressure on, and he came on to the bridle a bit earlier than I would have liked but was still strong on the line.

“He still wandered around a bit in the straight so there is probably a bit more there if you need it.”

The Difference is building a nice record of five wins and as many placings from just 14 starts.