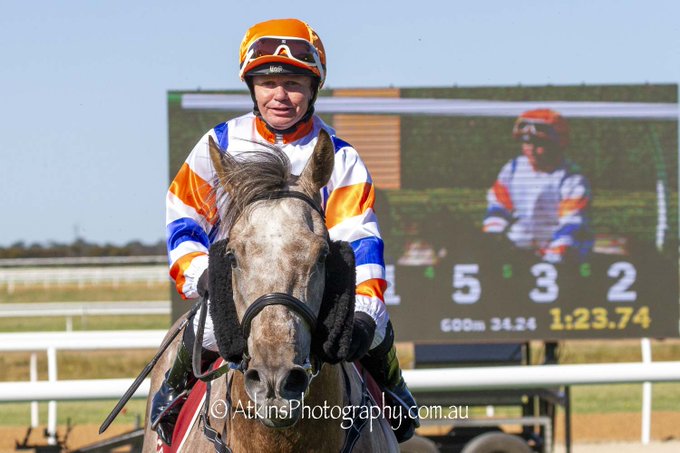 Eye-catching grey The Olympian turned in a ‘gold medal’ performance at Murray Bridge on Wednesday, September 9.

The Tony & Calvin McEvoy-trained three-year-old finished best to win the Fibretrack Maiden (1400m) under a great ride by Barend Vorster.

Vorster settled the grey midfield before asking him to improve approaching the home turn and he quickly moved up to the leaders.

Meadows Young Buck, which was in front, gave a good kick but The Olympian moved alongside and proved too strong as they spaced the rest of the field.

Trainer Tony McEvoy said he had been confident the grey would be very hard to beat in maiden company.

“He deserved that win,” McEvoy said.

“His first two runs were excellent, then there was that 58 race against the older horses at the mile and I went for it and it was the wrong thing to do even though he had a really tough run in the race and no favours.

“We freshened him a little and changed a bit of gear, and brought him back to this big, beautiful, fair track.

“It was lovely to see him win today.”

McEvoy said the trainers had decided to add winkers today.

“He was just racing a bit on and off in his races and just learning.

“We gave him some help today with the winkers.”

Winning jockey Barend Vorster was full of praise for The Olympian.

“I enjoyed that,” Vorster said.

“It was a matter of getting him to do what we wanted him to do, and he set it up beautifully for me today.

“Eventually I think he will appreciate stepping up to 1600 metres.

“For me, I thought he showed a bit more than I expected in his first outing.

“Obviously then you keep stepping him up, but he wasn’t quite there yet.

“Last time he was a bit too keen and never settled for me but today he reversed it around.

“The pace was nice and genuine, and I got him to relax.

“Through the 500 metre mark I knew it was just a case of timing and letting him down nicely.

“He let down very nicely although over the last 100 he was still looking around a little bit.

“He wanted to shift in a bit, but it was still a very nice win.”