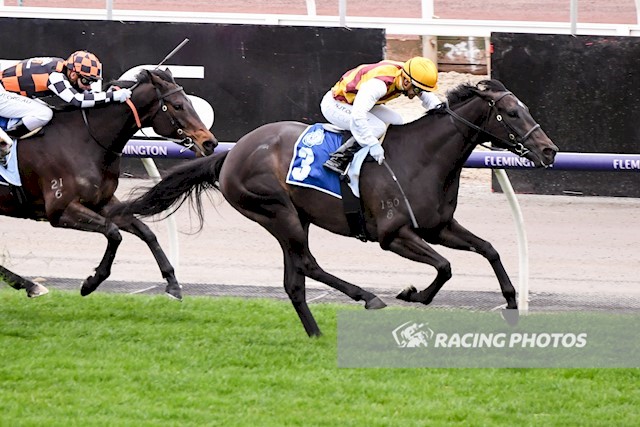 Currie, who has ridden more than 1300 winners during his career, suffered neck fractures in a fall at Moonee Valley in February and only recently returned to race riding.

Class mare Pretty Brazen ($20), although easy in the market at her second run from a spell, was ridden to perfection by Currie to score a long neck win in the black type feature from Arcadia Queen ($3.80) with Bonvicini ($21), a length away third.

The four-year-old mare settled midfield and Currie elected to track up stablemate Shrouded In Mist to the leaders approaching the home turn.

Currie allowed Pretty Brazen to move up to challenge in the home straight before asking her to sprint for home over the final 300 metres.

It was a crucial sprint as the runner-up was trailing her but was left astern when the winner went clear.

“She has been training on well since her first up run.

“The first run was a pass mark, we expected maybe a little bit more.

“Now that she has got to the 1400 metres that is really where we see the best of her.

“It was great to get Luke Currie’s first win back.

“We missed Luke while he was injured, he’s a great team player – I’m thrilled for him to get a Group 2 winner for his first victory back.

“It was a wonderful win for owners Linda and Graham Huddy who paid good money for her as a yearling.

“She won the Sandown Guineas (Gr 2) earlier in her career and was the first filly in 14 years to do it.

“We’ll consider backing her up in the Rupert Clarke Stakes next week depending how she comes through today’s run.

Winning jockey Luke Currie was delighted to be back in the winning list.

“I’m pretty happy, it’s been a while,” Currie said.

“It’s been a long time between drinks, but it is really worthwhile when it is a Group 2.

“I had a good team around me and was never in doubt I would be coming back.

“She presented so well today.

“She was three wide with cover which I was really comfortable with knowing she could come out wider when I wanted.

“I couldn’t hold her slow enough when we cornered.

“I knew she would get there early, she was only second up and going to be vulnerable late.

“She got a bit tired so there is going to be improvement, but it was a very good effort.”

Pretty Brazen now has an impressive record of five wins and three placings from 14 starts collecting $528,075 in stakes.