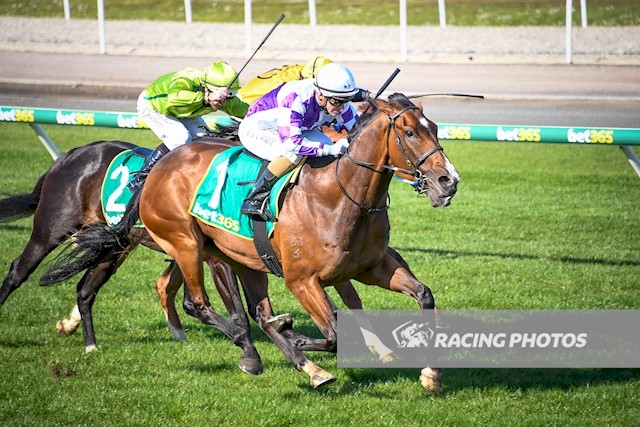 Frankie Pinot stamped himself as a horse to follow with a strong win at Geelong on Thursday, October 1.

Carrying a massive 62kg and having his first start on a heavy 9 track, Frankie Pinot came from second last to win the APCO Foundation Race 4 A Reason Class One Handicap (1443m).

Easy in the market drifting to $3.80, the four-year-old, ridden by Luke Currie, powered home to score by three-quarters of a length from Fender Bender ($2.15 fav) with Turbeau ($4.20), a long head away third.

The victory completed a good 24 hours who part-owners Anne and John McDonnell who also have a share in yesterday’s impressive Murray Bridge winner Halogen, the half-brother to champion mare Sunlight.

Extra special for the McDonnells with Frankie Pinot, they bred him, and race him with other family members.

“To carry such a big weight and having his first run on such a heavy track and win like he did was impressive.

“There is no doubt he is a progressive young horse.

“We’ve always liked him, but early on he was sore in his knees and eventually had to have surgery.

“As a result, he was away from the track for more than 19 months, but his three runs back have been very good.

“He ran well first up at Sale, we took him to Adelaide to win his maiden, then he went back to Melbourne.

“I think the spring will come up too quick for him, but I’m excited about campaigning him next year.”

McEvoy said he liked the way Frankie Pinot had run through the line at his two wins and was unsure what would be his best distance.

With his win, Frankie Pinot took his record to two wins and three placings from just five starts.