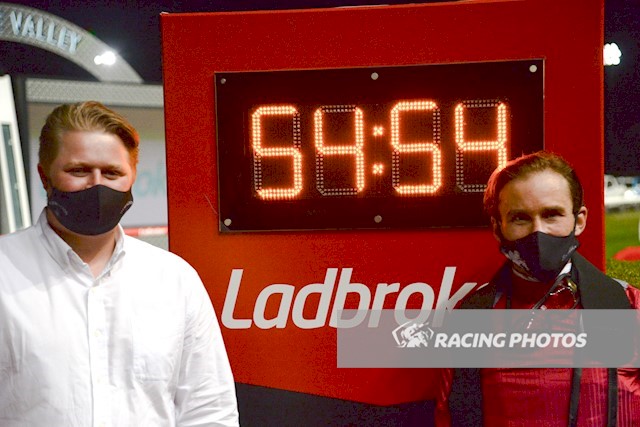 In the process, Meteorite set up trainers Tony & Calvin McEvoy for a $55,000 bonus as part of the Ladbrokes 55 Second Challenge.

The cash prize is awarded to the trainer of the fastest horse during the Moonee Valley night racing season with a series of 16 races with tonight being just the second of the series.

On Friday, Meteorite, resuming from a spell and ridden by Luke Currie, flew the gates and made the Ladbrokes 55 Second Challenge Benchmark 64 Handicap a procession.

The son of Deep Field has always been highly rated by the McEvoy stable but being a colt had not always been co-operative both in training and on race day.

Since his previous run, a fourth at Ballarat in March, Meteorite had a bone fragment removed from his left knee and was also gelded.

Despite his knowledge of the gelding’s ability, Calvin McEvoy was still a little surprised by the all-the-way win.

“Gee, that was impressive,” McEvoy said.

“I wasn’t really sure he would be sharp enough for the 955 metres even though in his jump outs he has been very fast.

“He just travelled superbly, was quick out of the gates and it was a great ride by Luke.

“He looked like he was going quick early and never really came off the bridle until the last 100 metres.

“He’s always shown us that ability and it was nice to see him do it as a gelding on the racetrack.”

McEvoy said the $55,000 trainer’s prize was like winning a Group One race.

“If it comes to be, we’ll have to see how much the old man lets the junior co-trainer get,” he laughed.

“Well done to the owners, it was a fantastic result.”

Meteorite was purchased for $190,000 at the 2018 Melbourne Premier Yearling Sales by Suman Hedge Bloodstock in partnership with McEvoy Mitchell Racing.

Suman Hedge stayed in the ownership and brought in a group of friends.

“He sprung the gates,” Currie said.

“I reckon that was probably where he took the time off the clock.

“He flew out of the machine and hit the ground running, straight over to the rail.

“I let him roll, holding on to him a little bit because he was obviously first up for a while.

“When I asked him on the corner, he rails up against that fence and hit the line.”

Currie said Meteorite’s attitude had improved since being gelded.

“After winning here previously, he was hard work – could be hard work on the way back to scale.

“He’s ironed that out with his gelding.”