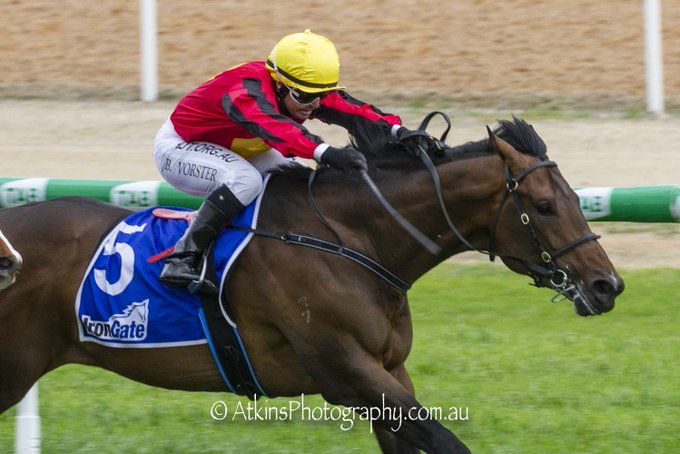 Staying bred three-year-old Around The Horn made a wonderful winning debut at Murray Bridge on Wednesday, September 30.

Having his race start over 1600 metres in the Brian Foster and Jock Mobbs Memorial Maiden, Around The Horn showed a lot of fight to claim victory.

The win brought up a double for trainers Tony & Calvin McEvoy who had won earlier in the day with Halogen.

The colt jumped nicely, and Vorster had him midfield on settling down before asking him to improve turning for home.

Around The Horn pushed through into the clear and gained momentum to loom up to the lead and although challenged over the final 200 metres, maintained his advantage to win well.

Trainer Tony McEvoy was delighted with the win by Around The Horn.

“I was quite impressed with what I saw today,” McEvoy said.

“He made a few mistakes. In the field early he over-raced and panicked a little bit.

“Then he got into a rhythm before getting off the bit, so he is still learning and that is what happens first time out.

“I suppose that is the risk of running them at a mile (1600m) first time out.

“They love their stayers and are successful boutique breeders running Daisy Hill Stud and do a very good job.

“This fellow is by an English Derby and Arc winner (Golden Horn) out of a Street Cry mare who is out of a Sadler’s Wells mare – I don’t think it gets much better than that.

“Calvin and I are really proud to be training him for them, and very pleased to see what I saw today.

“The Bamfords have been really patient, and of course when you go into racing horses like this fellow you have to be patient.

“They’ve allowed us just to develop him and bring him through. They’ve agreed with everything we have asked to do and been a real pleasure to train for.”